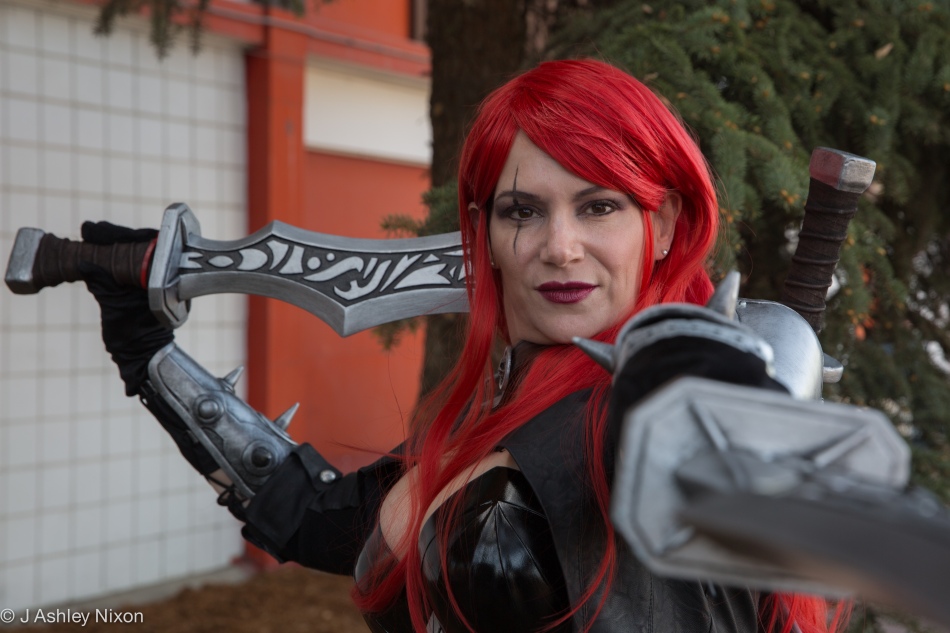 Jeanette as Katarina, from the League of Legends at the Calgary Expo, May 1, 2016. © J. Ashley Nixon

As another year is about to close it gives me the opportunity to post a selection of photos from the past 12 months. As with the previous three years, I have collected a set that recognizes the number of the passing year: 16 images are here for 2016. The featured photographs come from Canada, England, Peru and the USA. You can view the collection here together with comments and links back to some of my blogs from 2016. You can view my photo selections for previous years here for 2015, 2014 and 2013. I have also posted the series as a gallery on my photo website J. Ashley Nixon.

January/February: A lost glove on a bleak, bitterly cold bench looking across the frozen water of Glenmore Reservoir, Calgary. I was there to meet an assignment for The Photography Institute, part of a Diploma of Professional Photography, which I successfully completed in Spring.

March: I was in Vancouver to shoot the HSBC Canada Rugby Sevens tournament at BC Place. The New Zealand All Blacks won Round 6 of the international circuit in an exciting against South Africa.  Featured here is the game between USA and Fiji, the best-supported team over the weekend and later on, world champions of rugby 7s when it became an Olympic sport in Rio.

April: After many years working directly for Shell, I was back in Detroit, one of my favourite cities, this time hired to photograph the Shell Eco-marathon. Over a hundred university and high school teams from across North and South America were competing to make their own designed and built vehicles to be the most fuel efficient in a downtown circuit around the Cobo Center and Woodward Avenue.

May: I had the pleasure of meeting up with Stan Lee at the Calgary Expo. He told some thoroughly entertaining stories about his life and career with Marvel. During the weekend, thousands of cosplayers displayed their costumes and role-played their favourite characters from books, comics, and films. One of those was Jeanette from Calgary, taking on the menacing side of the character Katarina from the League of Legends (see opening photo above). My photo book on the Cosplayers of Calgary is under production.

June: A chorus of thunderstorms, rain and hail didn’t stand in the way of music lovers getting out to the clubs and pubs of Calgary on a Friday night, June 24. I was at the Ship and Anchor on 17 Avenue to shoot The Flatliners, Big Knife/Little Knife and Night Committee. Three of many bands that I photographed over the weekend’s Sled Island festivities in CowTown.

July: Three days before the photograph below was taken, my Dad passed away. I thought long and hard about a tribute to him before steering towards an image of one of Yorkshire’s many landscape beauties: Malham Cove. The limestone presents geological challenges to potholers and climbers, myself among them in my Scouts and student days.  Ever onwards and upwards.  Miss you, Dad.

August: I made it back to Peru in August to continue with preparations for a book on sustainability (food, energy and water) in the country. This trip focused on the north, from Chiclayo on the coast to Jaen, up and over on the eastern side of the Andes to visit sugarcane, rice, coffee and cocoa growing areas. It also coincided with the opening of William’s international rugby career as a member of the Peru U18 men’s team playing against Ecuador, Colombia, Mexico, and Venezuela.

José has been a fisherman in Huanchaco, Peru for 52 years. Now, he builds the traditional boats used daily in the Pacific Ocean. I spent a while with him as he constructed a “Caballito de Totora” from reeds grown locally.

Vincente has been cutting sugar cane for about ten years in the plantations around Cartavio in northern Peru. Hard, not sweet work. This photo was taken on World Photo Day during an assignment in Peru for a book on sustainability in food, energy, and water.

Alonso, a local surfer jumped off the pier at Pimentel, Peru into the sun and the Pacific Ocean. This image was taken on August 25, as a tribute to the life of Natasha Rose Gould. Natasha, age 12, and a close friend of my daughter was diagnosed with DIPG brain cancer in May 2015.  She passed away on August 4, 2016.

William Nixon (Calgary Canucks) was in action for Peru at the South America U18 rugby tournament, Chiclayo. In this week-long tournament, Peru played against Colombia, Mexico, and Venezuela as well as two friendly games versus Ecuador.

September: With more time teaching at Mount Royal Univerity (MRU), I took on several events to photograph. One was a gig by Mother Mother played outdoors in the majestic campus ampitheatre.

A second was the crazy, fun and colourful Colour U Blue event that has become an established way of welcoming new students to the university @mountroyal4u

October: My featured photo for October is also from MRU. Here is a try scored by MRU in their game versus UBCO at the Lincoln Park campus, Calgary.

November/December: In early December, the Calgary Girls Hockey Bantam 1 (White Hawks) team went to Canal Flats, BC for a tournament against a couple of teams from Calgary and one from Montana, USA. They came away with a full win column and look forward to a return tournament in Montana in January.

Thanks for taking a look at my selection of seventeen photos from 2017 You can see more in my galleries using the following link: