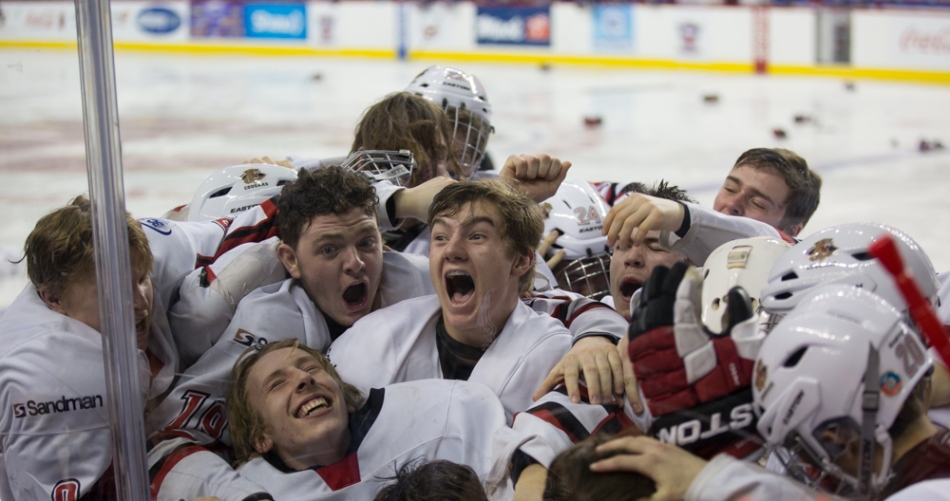 As the year 2015 approaches its final hours, I selected 15 photos from my portfolio across the past twelve months. The featured images come from Canada, USA, and Peru. You can view here with comments and links to some of my blogs from the year or go to my photo site here.

January: As with previous years, hockey has a place in my portfolio. The featured image (above) comes from New Years Day 2015. The Cariboo Cougars were celebrating their win in overtime of the final of the Macs Midget AAA International hockey tournament at the ScotiaBank Saddledome, Calgary, Canada. See here for more on this hockey tournament.

February: The International Rugby Sevens Tournament in Las Vegas, USA attracted fans from around the world. This group of Brits and assorted follow-oner’s were combining their rugby pleasures with a stag night (or three) in Casino City. All dressed for St Valentine’s Day they drank an impressive volume of Guinness throughout the day and night.

March: Spanish rock band Jarabe de Palo were in Calgary for a gig and my son’s Midget hockey team won the City Championships. This shows their moment of victory.

April/May: Several trips to Detroit for Shell culminated in my first planned #UrbanFieldTrip to investigate food, energy and water in the city. This theme was picked up again at the end of the year and will form a major part of my writing and photography for 2016.

The Calgary ComicCom (Calgary Expo) proved to be a superb photo assignment with many visitors splendidly dressed up as their favourite characters.

June: What turned out to be one of the best rock gigs I have attended happened at the University of Calgary in June. Steven Wilson and band were in town touring their 2015 album Hand. Cannot. Erase. If you like Progressive Rock and haven’t heard Steven Wilson’s work this is a must check out. Here is the review I wrote.

July: Continuing the music theme and festivals, I was able to secure a full week-end pass for the 2015 Calgary Folk Festival. My top pic from the many fine acts was who played goes to Ben Sollee for his inspirational and creative cello playing plus cajon based percussive support from Jordan Ellis. More reviews on this to be found here.

The Calgary Stampede Parade provided some spectacular easy morning light and some memorable stories. This one shows a soldier so taken up by crowd recognition that he had to make a run and catch up with his platoon. Big respect to all the men and women in the  Canadian Armed Forces.

August: The King Henry VIII School (KHVIII) from Coventry, England were on tour in Alberta in August. This image captures one of their tries in a game against the Alberta Mavericks U18 side.

September: I had a couple of days on assignment for the cycling Tour of Alberta which for the first time went into the Canadian Rockies. The landscape and cycling challenges of  this race are clearly a match with the more famous Tour de France. It can only get bigger and better in the future.

October: A couple of images here: the first is perhaps my favourite image of the year simply because of how I was able to capture a moment of morning light on some hockey skates.

The second was a fun photo opportunity that happened right in front of my camera as I was taking shots of the FDR monument in Washington DC, USA.

November: The biggest gathering of the worlds political leaders to determine action on climate change happened in Paris with COP21. Ahead of that and closer to home, significant actions were introduced by the new Albertan government. This image taken a little earlier in the year reminded me of the challenges that we need to face in our Pathways to a low carbon future.

December: With my retirement from Shell, I picked up a consultancy and went on assignment in Peru. Two intensive, inspiring weeks of photography on location along rivers, new city developments and the streets of Lima. Here you see a dairy farmer showing how the provision of a water supply a few years ago enabled his to develop his small milk production business in the desert south of Lima. This is part of a book I have under production on the integrated themes of food, energy and water within the sustainable development of rapidly growing cities. Working title: #UrbanFieldTrip: Lima.