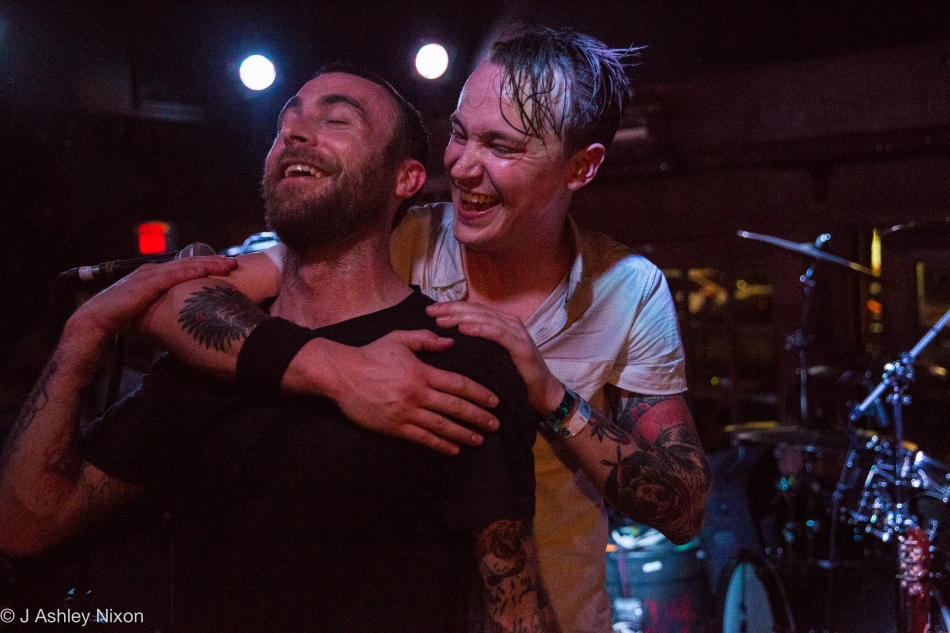 Chris Cresswell and Jon Darbey of The Flatliners at The Ship & Anchor during the 2016 Sled Island Music Festival in Calgary, Alberta, Canada © J. Ashley Nixon

A chorus of thunderstorms, rain and hail didn’t stand in the way of music lovers getting out to the clubs and pubs of Calgary for Sled Island 2016 on Friday night. There were big queues (line-ups) at several of the venues to see shows by The Sonics, Psychic TV and others.  At the Ship & Anchor on 17th Avenue, your writer/photographer had to stand on the street for quite a while as the staff worked out how many had piled into the pub. Fire Code and safety are number one.

The pub, popular for its coverage of real football as well as music gigs was packed from bow to stern (and, as the music progressed, up into the masts). The line-up for the night included Big Knife/Little Knife, Night Committee and, to close out,  The Flatliners.

The Flatliners have acquired a big, passionate following across Canada due to their reputation for performing good gigs as well as their stream of albums beginning with Destroyed to Create (Union Label Group), released in 2005.

Their 2013 album, Dead Language (Fat Wreck Chords), was nominated for the 2014 Canadian Juno Awards for Metal/Hard Music. Division of Spoils, their current recording, was released on Fat Wreck Chords in 2015. Plenty of fans were in CowTown to see the Greater Toronto Area band play what was, surprisingly, their first gig in the history of Sled Island. A decade and more together in the pubs and clubs for Chris Cresswell (guitar & vocals), Scott Brigham (guitar & vocals), Jon Darbey (5 string bass) and Paul Ramirez (drums) showed through in their brilliant tight-knit performance.

It was a superb set that hit the spot, and then some more. To start up was Sew My Mouth Shut, progressing through numbers such as Resuscitation of the Year, Monumental and, towards the end, Birds of England and Eulogy. Waves developed from the back of the mosh pit and crashed up against the stage. Many of the fans in the frontline sang along with the lyrics projected by the three frontmen. Brilliant high-octane punk rock to fuel the Ship!