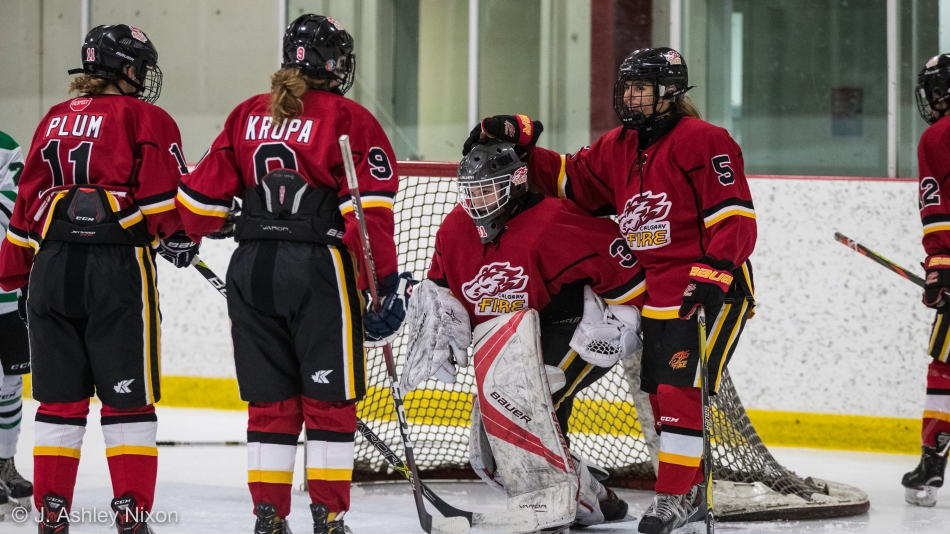 Alexa Brown, Calgary Fire White, congratulates her goalie, Cienna Kinghorn, after one of her saves in their Alberta Female Midget Elite game versus Rocky Mountain Raiders at Bowness Sportsplex, Calgary, Alberta, on December 14, 2019.

An outstanding game by Calgary Fire White’s goalkeeper, Cienna Kinghorn helped her team to a 2-1 win in their final game of 2019 before the Christmas break. “C” was the boss; the CEO of the net with her three shootout saves and two stops against break-aways from the Rocky Mountain Raiders.

Fire White opened the scoring in the closing seconds of the first period when Marlee Oczkowski got one past Raiders goalie, Elen Poelzer. Kristin Leduc equalized for the Raiders at 18:40 in the second period and the score remained at 1-1 at the end of regular time. Fire White tried to exploit a four on three advantage in overtime after a cross-checking penalty to Kaia Gron carried over from the closing seconds of regular time. But the Raiders defence held up and the game went to the shootout.

Cameron Krupa had Poelzer beat but her shot hit the crossbar. Poelzer pad-saved Fire White’s second shot from Avery Krawchuk.  At the other end of the ice, Kinghorn made pad saves against three Raiders shooters: Madeline Hubbard, Alexis Smith, and Hailee Easson. Hannah Suto clinched the game for Fire White with her shot sent in stick-side past Poelzer.

Fire White shares the top position with their Fire Red sisters in the southern division standings at the end of 2019 with 29 points. Fire Red has a game in hand.

Up next: Fire White and Red meet again for the first game of 2020 on January 5, at Father David Bauer Arena, Calgary.

Song of the Match

I’m going with the very first song of the game played by DJ Calvin; a hit by Liverpool band, Frankie Goes to Hollywood from 1983. The spectacular production by Trevor Horn pushed the Frankie’s debut single to the top of the charts that year while facing controversy due to the song’s lyrics and its original promo video. The following video is an alternative version…Enjoy the Christmas break, hockey fans and make sure to Relax.

Please visit J. Ashley Nixon Communications for more photos from this and other hockey games.