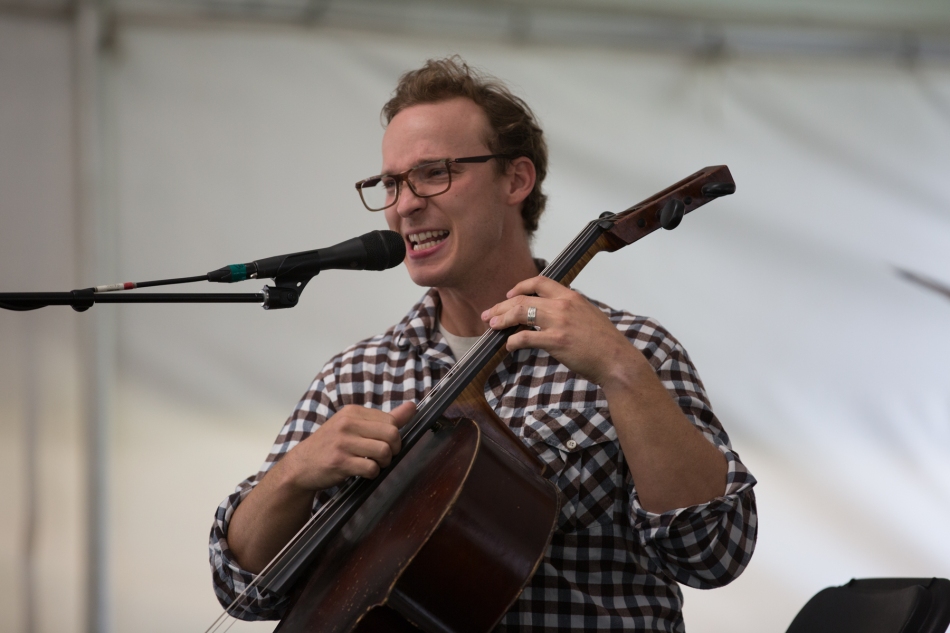 Back in the early days of the festival, Stage 6 was so remote from the electricity supply it was open just for acoustic performances. This year the FestivalHall was hooked up with a mobile solar panel unit to power some interchanges of music across the continents.

Cellist, composer and story teller Ben Sollee played a set that blew away perceptions many in the audience must have had around how a cello is played. The voices of the guitar (acoustic, electric and bass), violin and even banjo could be heard as he laid into his four strings with an energy never heard of in chamber music.

The Kentucky player stayed on stage as Officer in Charge for an outstanding World Music workshop titled War on Error featuring Davide Salvado, Söndörgö and The Stray Birds. He interpreted part of his duty to get his fellow musicians to reveal how failures became learnings and then maybe successes. A very positive pitch for creative development but the three piece Pennsylvania based The Stray Birds weren’t buying in. At least not for a little while. But then they conceded that the song they were about to play had been played just once before. And not very well……They were prepared to give it another go with all three of them singing into a vintage looking dynamic microphone that fought with feedback (just in the key of C!). But eh, it went down mighty fine.

Söndörgö started up a Hungarian folk tune played with accordion, mandolin, clarinet and upright bass (played with a guitar pick).  As is customary, the other musicians joined in with the melody. Percussionists put down a rythm, not your usual stuff mind but a cajon played with a bass pedal by Jordan Ellis and a square framed instrument called a Pandero Cuadrado de Peñaparda played by soulful singer Davide Salvado from Galicia. The Pandero is a unique instrument made in the town of Peñaparda in the western part of Spain.

At the close of the tune, Ben Sollee was told by Söndörgö’s mandolin player in a nice but blunt kind of way that he didn’t really like it. Too  noisy. That kind of tune doesn’t usually come with drums! The audience, ignorant to the nuances of the traditional arrangement, loved it. One of those happy accidents that come from the chemical mix offered up at the Calgary Folk Music Festival.