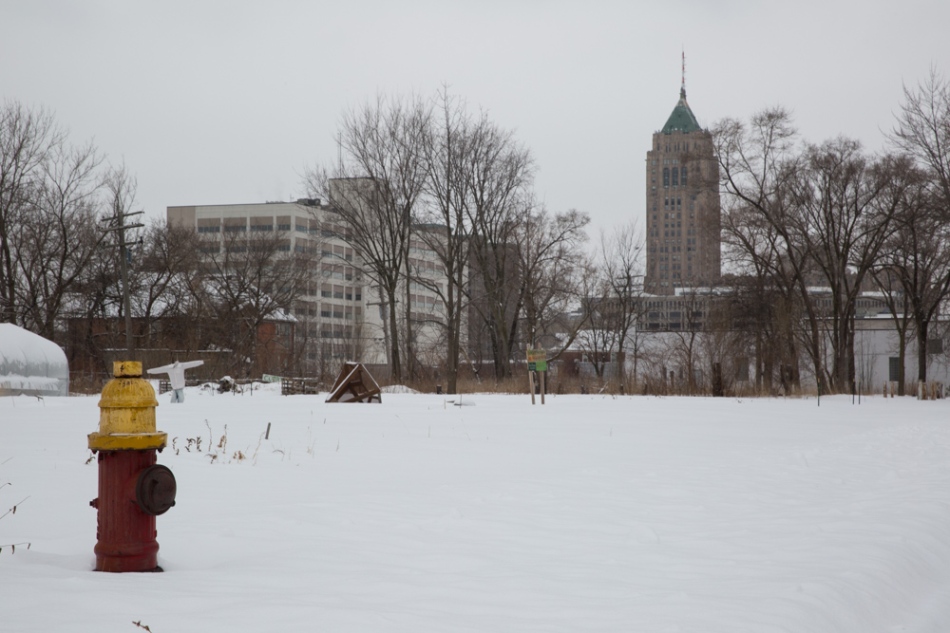 The Fisher Building is one of many special buildings in Detroit. Designed by Albert Kahn Associates and built in 1928 for the Fisher Body Company, its magnificent Art Deco style stands today as a testament to an era of intense auto manufacturing and massive wealth generation in the place known the world over as Motor City.

Just over two decades after this landmark skyscraper was built, Detroit had become the 4th largest city in the USA. The population had grown to almost 1.85 million mainly thanks to the huge successes of the car industry led by the Big Three companies: Ford, General Motors and Chrysler. But big growth transitioned to slow economic decline, chiefly a function of its heavy, almost singular reliance on the automotive industry. Automation squeezed out jobs. Car and component firms faltered in the face of the energy crisis in the 1970’s, followed by recession and foreign competition. Bottom was reached on July 18, 2013, when the City of Detroit filed for bankruptcy. This rough chapter was turned in December 2014 after a plan was approved to get the city out of debt ($7 billion) and invest ($1.7 billion) back into long impoverished municipal services.

The city of people now stands at around 690,000, a population lowered by decades of job losses and a migration out to the suburbs. The city of buildings has also been impacted: out of Detroit’s 380,000 properties, 114,00 or so have been demolished and around 80,000 are considered blighted and at risk of coming down too.

Three blocks away, almost in the shadow of that iconic Fisher Building, there is a movement happening, focused on bringing sustainable value to vacant lots. The location is the North End, where some elegant houses dating back to the late 19th Century still stand, spaced unnaturally apart. Some are inhabited. Others are derelict or now only show the remains of their foundations through the snow. Weighing up prospects, many of their owners walked away from them after failing to meet their payments on grossly devalued properties.

Tyson Gersh and Darin Mcleskey, former students at Michigan State University, set up the Michigan Urban Farming Initiative (MUFI) and came into the North End in 2011. The nonprofit organization was established to address poor diet, nutritional misunderstandings and food security. They did this with actions, not words, bringing horticulture to about an acre of vacant land along Brush Street. Helped by an army of some 2,500 volunteers, they have planted and harvested over 5,000 kg of produce per year that goes first to households that struggle to pay for, and use, fresh vegetables and then to local markets, restaurants and charities.

Just across the road from the urban farm stands 7432 Brush Street, a large, six unit apartment building that MUFI purchased in October 2011. Dating back to 1915 it was used continuously until around 2009 but then became uninhabitable. Their goal is to turn the structure into a community resource centre that will help foster sustainability and urban renewal. The first signs of that are clearly stated in the bold and colourful murals covering the walls. In the future, the first floor is to be turned into a community resource centre to accommodate new or small scale non-profits that seek to advance sustainability, community, and/or education in the Detroit community. Later on, a multi-purpose room is to be added to provide hands-on experience on food growing and preparation including an industrial kitchen in which community members can manufacture goods for selling at markets.

On another corner, along Horton Street, stand two sibling structures. One has lost its battle against neglect, fire and rain. The other must fancy its chances of survival, given the help it is getting from the MUFI team’s complete renovation including new wiring and plumbing.

From blight deconstruction to blue and green infrastructure

Tyson Gersh has some other plans for MUFI’s community work, gearing towards adaptive reuse of the built environment. He is looking to demonstrate cost-effective and scalable models for “blight deconstruction” that create functional blue and green infrastructure. That includes the use of the basement/foundation structures of deconstructed (as opposed to demolished) houses for hydroponics and horticulture.

Clearly, MUFI is digging in for Detroit.

MUFI is one of more than four hundred organizations included in the 2014 Good Food Org Guide by the James Beard Foundation and Food Tank. The guide highlights nonprofit organizations that are cultivating a better food system in the United States by doing exemplary work in the areas of food and agriculture, nutrition and health, hunger and obesity and food justice.