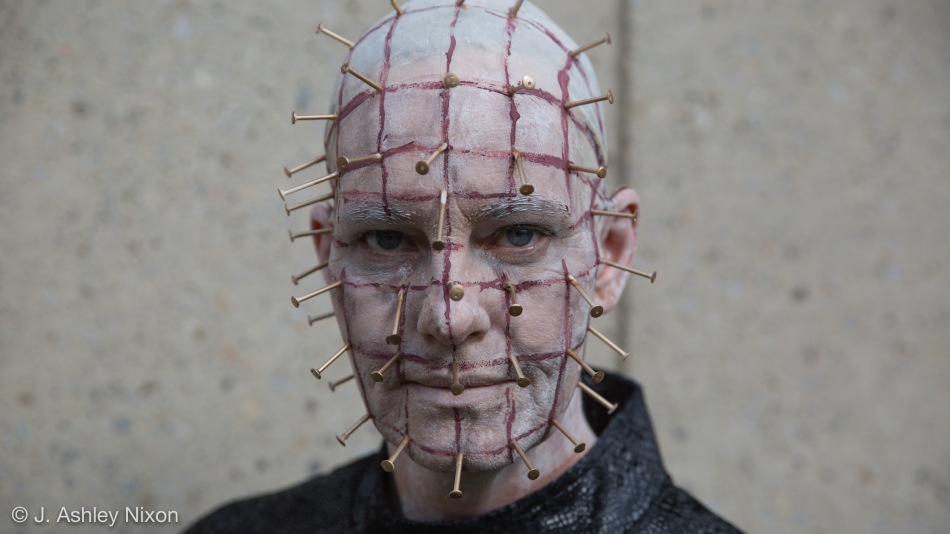 All Dressed Up: Portraits of Cosplayers

This article is an excerpt from my new publication All Dressed Up: Portraits of Cosplayers. With 97 photographs, the book explores the character within characters; stories from people performing their own versions of other people they have a passion for.

Sarah Panasiuk was nailing it as Pinhead from the film Hellraiser, released in 1987. Her makeup, a detailed assembly of pins attached to her face was crafted and painted meticulously. She also carried a puzzle box, known as the Lament Configuration, which this Cenobite character uses for transport to Earth from outer worlds. Sara watched the movie when she was “about seventeen years old”. Pinhead first appears unnamed as a character in Clive Barker’s novella The Hellbound Heart. The name “Pinhead” stuck after a film crew nicknamed the actor so during the shooting of the first Hellraiser film.

“Pinhead was my favourite character”, said Sarah. “I always wanted to dress up like him. I went for it this year and probably going to be (him) for the rest of the Comic Con’s.”

View or purchase All Dressed Up: Portraits of Cosplayers

You can view (virtual flip page) and/or purchase a print copy or Instant PDF version (viewable on any device) of All Dressed Up: Portraits of Cosplayers via this link.

Copies are also available for purchase at The Camera Store, Calgary.

0 comments on “Nailing it”