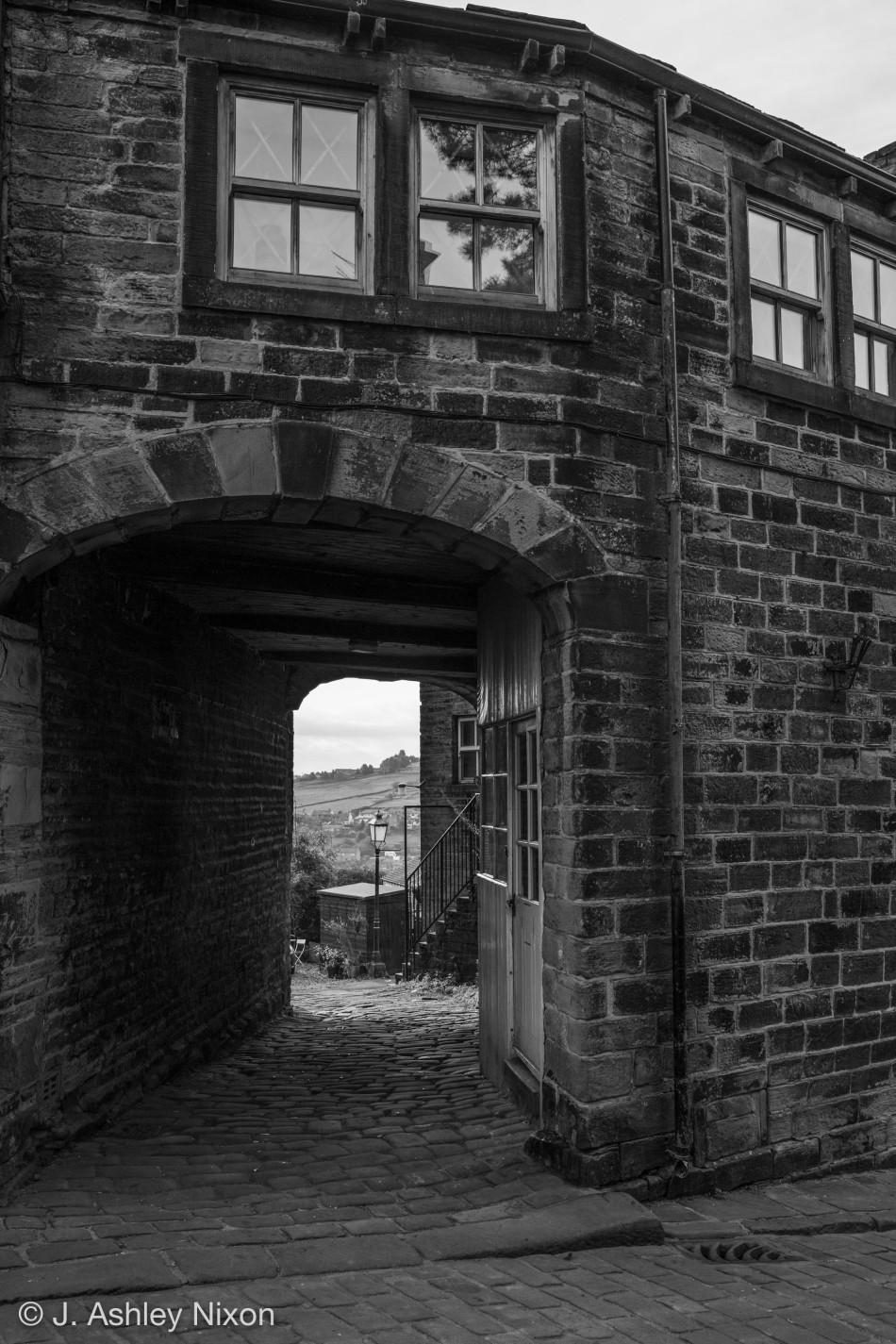 I have a snippet to share about a snicket in Haworth. A what you might say? A snicket is a word used in Yorkshire to describe a passage between buildings. If you want to get picky about a passage that goes through rather than between buildings, then another word must be used: ginnel. Both have origins in the Old English language from the days of the Saxons before the Viking Raiders came over the North Sea to acquire and pass on the land of God’s Own Country to our forebears.

Brandt and Davenant in Dean Clough

Both words came up in a conversation I had recently with my Mum, Dorothy Nixon and sister, Sally. I mentioned that I had seen a photograph made by Bill Brandt in around 1937 of a snicket at Dean Clough in Halifax, Yorkshire. It was posted on Twitter by Marc Davenant, alongside one of his own, more recent, images that were taken from the same place using a vintage Leica. The same shadows were there; the light reflected off the setts (often called cobbles) in the same manner. It was even “possibly the same tree,” said Davenant.

Davenant’s excellent Twitter feed is prolific and delightfully varied. It not only shows images from his own work that includes a strong theme around homeless people on the streets of Britain but also stories on the work of other photographers. If you have an interest in documentary photography about Britain, you should check out his communications. Now back to my own story…

Conversation with my Mum, now in her nineties, gets harder with the passing of time as she struggles with her dementia. Sometimes though, there are flashes of brilliance in the memory of this working-class lady who became well-known in and beyond the village as a pantomime pianist and Yorkshire dialect poet. During a WhatsApp call from Canada to her care home in Bradford, I asked her about the name of the place in Haworth known locally as the Picc. The arched entrance (it’s a ginnel, not a snicket) at the top of Main Street used to lead to a community of houses on a collection of streets (Moon Street, Star Street, Ivy Street) built on the steep hillside above Bridgehouse Beck, and the Keighley & Worth Valley railway line that steam train enthusiasts have kept going since the Beecham closures. Don McCullin’s brilliant book In England (2007) includes a photograph (Haworth, Yorkshire, 1961) taken at the bottom of the Picc that is packed with cultural significance and calls out to me personally from my early childhood.

Tragically, that community, as well as those close by between Changegate and North Street (Well Street and Hird Street) where my mother, her parents, grandparents and other relatives used to live, was demolished in the late 1960s because of (I will make this polite) misguided thinking about town and country planning (in this case by Keighley Corporation) that determined houses without indoor bathrooms (they had outhouses) and damp in the walls couldn’t be improved. The blight arising from their short-sighted decisions remained tangible for decades as open car parks for the multitudes of visitors coming to Haworth to follow the trail of the Brontë Sisters.

Without a pause, Mum told us where the name Picc came from. “It’s short for Piccadilly,” she said. “Lasses used to hang around there in the ginnel to attract fellas. It was a bit like Piccadilly Circus.” We all laughed and Sally shared one of her stories from her career as a midwife. Recalling to her colleagues how we as kids would “laik” (Yorkshire dialect for play) in back passages called snickets, these baby deliverers from there onwards would always refer to those anatomical areas as snickets.

The ginnel at the top of Haworth Main Street is featured on the cover of Cobbled Together, a book of Yorkshire dialect and other poems by Dorothy Nixon with my photographs, available via Betula Books. Click on the button below to view.

0 comments on “Tales from the back passage: snickets and ginnels”