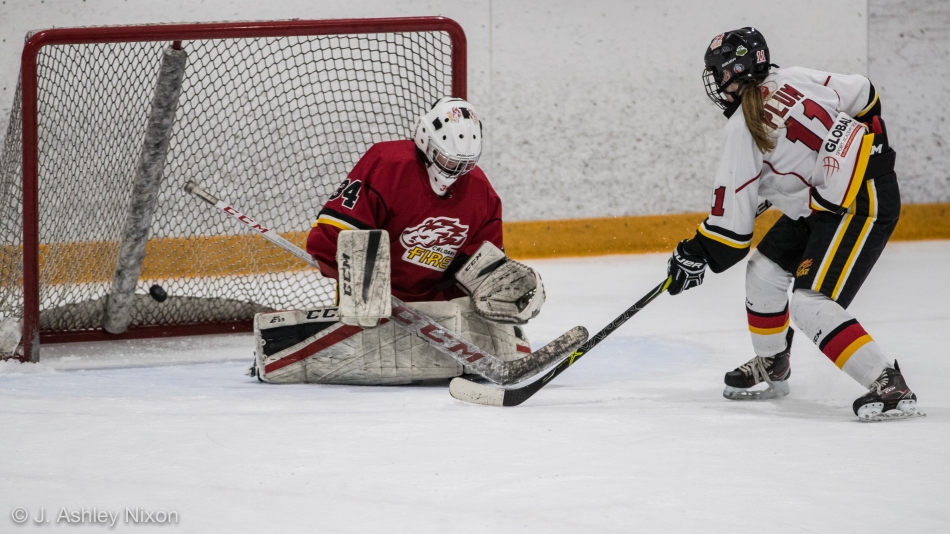 It was a special hockey day on three counts to welcome in the month of March. The last league game of the season; the final encounter between the Fire sisters; and a celebration of the eleven third-year players graduating from the Calgary Fire Midget Elite program.

The on the ice ceremony was followed by a fast-paced, fiercely contested game that was all even, 3-3 after sixty minutes. Overtime didn’t break the deadlock so, like in the previous meeting of the Fire teams, the game went to a shootout.

Fire White’s Rylee Pennoyer was up first; her shot pad-saved by Kalynah Fong-Martin. At the other end, Teah Workman deked Fire White’s goalie, Madison Shenfield and beat her with a nicely placed shot above the glove. Hannah Suto evened the scoring with the next shot for Fire White, beating Fong-Martin through the smallest of gaps between right pad and post. Fire Red’s captain, Skye Mathew was forced out by Shenfield and her shot hit the side netting, no goal. Fire White took advantage with a blocker-side blaster from Rachelle Plum and it was down to Caitlin Watson to pull it back for Red. Shenfield glove saved and the win went the way of the Whites.

Up next: Calgary Fire Red and White finished the regular season in first and second place respectively in the southern division of the Alberta Female Hockey League and so get a bye in the first round of the playoffs that begin next week-end.

Song of the Match

DJ Dale played his hallmark brand of heavy rock songs from AC-DC, Black Sabbath and more. My pick though is a sing-along anthem from Scotland, at least in the walking words of the chorus. I give you The Proclaimers and I’m Gonna Be (500 Miles). See you at the playoffs, hockey fans.

Please visit J. Ashley Nixon Communications for more photos from this and other hockey games.

0 comments on “Fire grads in shootout”