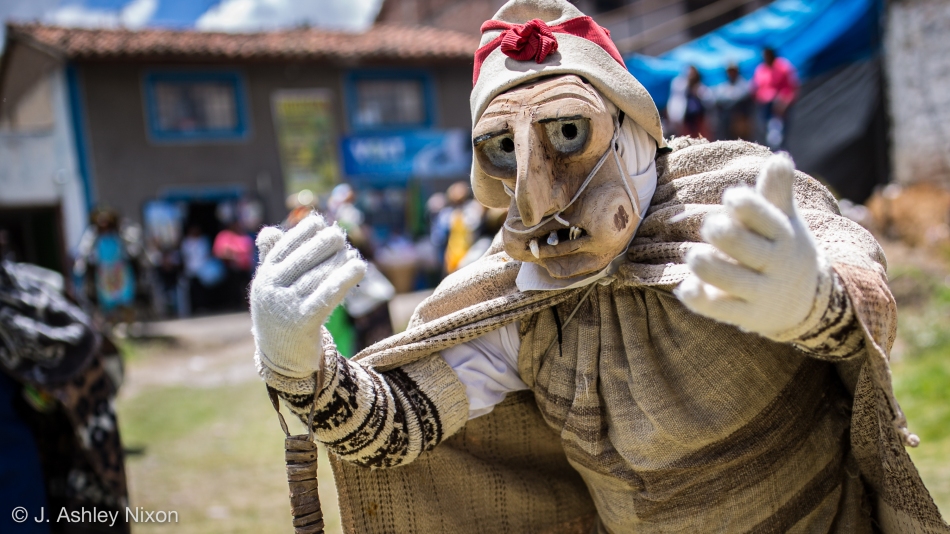 On December 27, 2018, Jennifer Nixon and I began our journey from Canada to Peru to film and photograph the dance known as the Huaconada.  After a short stay in Lima, we gathered with our other crew members, Carla Diaz Silva and Daniel Gomez and headed up the Carretera Central into the Andes. After a full day of driving, peaking at Ticlio, 4,8181 m up in the altiplano, we traversed through Oroya and down into the fertile Mantaro Valley. There in Mito, many of the town’s inhabitants were making their final preparations for this Peruvian dance that has been globally recognized by UNESCO for its Intangible Cultural Heritage (ICH).  We filmed over three days to show the masks and costumes, the ritual and some of the personalities involved with the performance.

Some of that story was told in a trailer released as an entry into the 2019 My RØDE Reel Competition. The book, Behind the Mask was published in 2020 and the full version (66 minutes) of the documentary film The Mask and More was released at the end of 2019.

You can see the full documentary film here!

The film in brief

Huacones are wooden-masked men who dance around the main plaza of the small city of Mito during the first four days of January each year. Although its origins are hard to pinpoint, the dance is rooted in the pre-Hispanic culture of the Peruvian Andes. It is linked to the ancient mythology of the region that had priests, or Huacones, acting as messengers between the gods in the world above (called Hanan Pacha in Quechua) and the world populated by people (Kay Pacha). While no one knows the specifics of those communications, we can imagine that their themes almost certainly featured water, food, and the land: the provision of rainfall, and good crop fertility.

The Old Huacones with their modest-looking cotton and woollen costume and shuffling steps are accompanied by Modern Huacones, colourfully dressed Miteños such as Medardo Verastegui Inga, performing a more scripted choreography. Both types of Huacon are transformed into figures that demand respect when they put on their wooden masks: the older brethren in grotesque caricatures carved from alder wood; the younger-looking in varnished carvings with prominent noses that take their form from the Condor, the Andean bird that has mythical significance as an animal messenger from the gods. All of the masks are the creation of craftsmen in Mito such as Julio Landeo Álvarez who is featured in the film.

The respect gained by the Huacones is matched by their authority, as demonstrated through the whips they wield, whose thunderous crack formed a key sound to punctuate the music of the La Huaconada de Mito, performed by Orquesta Folklórica Sinfonía Aquence under the direction of their leader, Jorge Chuquillanqui Inga playing tenor saxophone.

The cultural values of the Huaconada are articulated in the film by the Mayor of the District of Mito, Sr. Luis Emiliano Enriquez Bergna, who also speaks about some of the modern-day challenges faced by the community and Peru more broadly.

Using a filming and production crew of five (60% female and 70% Peruvian), this documentary (running time: 66 minutes) was shot on location over a period of five days, including travel up through the Andes from Lima. Film equipment included two Canon cameras and lenses (16-35mm, 24-70mm, 70-200mm), two Røde microphones (Rode VideoMic Pro+ and VideoMicGo), and portable Litra LED lighting. The film was edited using Adobe Premiere Pro.

6 comments on “The Mask and More: the Huaconada of Mito”