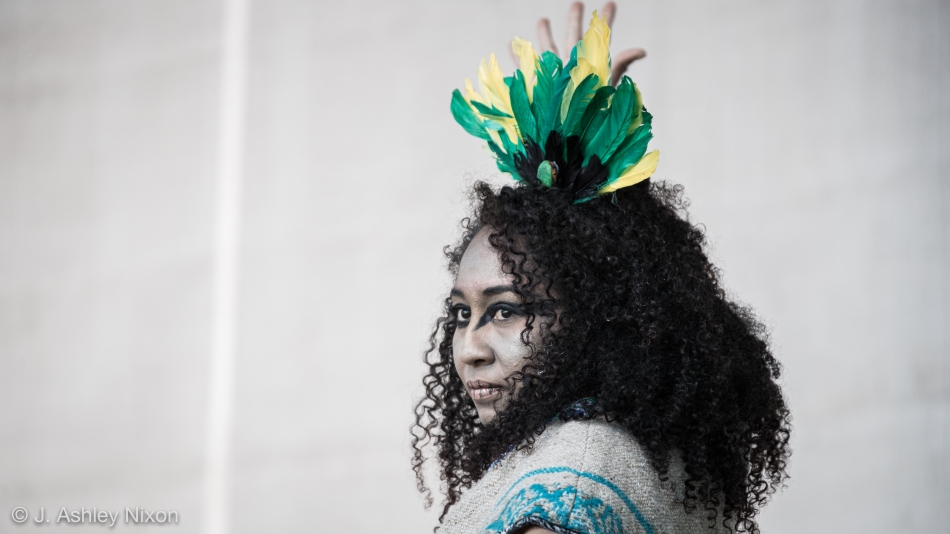 Coatlicue, the Aztec Mother of the Gods, represented by Nayeli from Mexico, performs with Mictlán Collective at Expo Latino, Calgary on August 18, 2019.

Hades is the name given to the ancient Greek underworld. Ukju Pacha is what the Incas called the world below their Peruvian mountain kingdom in the Andes. Amongst the ancient civilizations of Mesoamerica, the Aztecs of Mexico called it Mictlán. This Land of the Dead features prominently in the cultural heritage and rituals displayed in Día de Muertos, or Day of the Dead, celebrated with a public holiday on the first of November each year in Mexico and with parties thrown by the Mexican diaspora across the world.

Mictlán Collective, formed by experienced artists from Mexico, began performing in Calgary in November 2018. The group is currently busy finishing off its preparations for a Día de Muertos Parade through the elevated catacomb-corridors of the Calgary Plus 15 system on November 1 in association with the Hispanic Arts Society, well-known in the city for their annual Expo Latino, the biggest outdoor Latin festival in western Canada. Mictlán Collective performed at Expo Latino in August this year as part of an increasingly important traditional aspect of the festival that also features the best of salsa, samba, merengue and more.

Various dances and other cultural rituals in Mexico have been recognized by UNESCO for their Intangible Cultural Heritage (ICH), including Día de Muertos, which joined the ICH list in 2008. It’s a reminder of how this huge array of events paying respect to the deceased is far more significant than the Halloween parties that we go to dressed up as wizards and witches on October 31.

Susano established Mictlán Collective with Ximena González as a result of their common interest in researching, sharing and performing the rituals, art, philosophy, and mythology that form part of the heritage of the ancient cultures of the Americas. The group has other artists and actors including Almendra Vergara, Iván Gómez and others from Mexico or elsewhere in Latin America.

Mictlán Collective’s performance at Expo Latino was dedicated to the directions of the sun, and the places and forces that form the creation and other parts of Aztec mythology. It was, said Susano, “inspired by a ritual aspect present in all the ancient indigenous communities of Mexico, such as the greeting and thanks to the cosmic directions of wind and energy and the forces that each one represents.”

The energy of Teotl

Central to the metaphysics of the Aztecs, that deep interpretation of existence and human-cosmic relationship that was the foundation of their religion, agriculture, politics and more, is Ollin Teotl, a name that translates from the Nahuatl language still used in parts of Mexico as “energy movement”, a sacred force believed to be present in everything-living or dead.

The Danza del Venado, or deer dance, is one of the oldest dances of the prehispanic world, still performed by the Yaquis and Mayos peoples of Sonora and Sinaloa in the northwest of Mexico as a part of rituals to welcome spring. Traditionally, deer were revered as one of the most sacred animals in ancient Mexico, a beast that carried the sun on its back. The dance would be performed the night before hunting to encourage success. The deer on stage at Expo Latino was represented by Paco Sanz, with a clay deer head decorated with red, green and white ribbons on top of his own head, and a red gourd in each hand. He was joined on stage by a number of women representing the “natural elements and forces that put into operation the mechanism of nature”, explained Susano. These characters included Tonantzin, the Aztec Mother Earth goddess, represented by Faby Rios; Chalchiuticue (which translates from Nahuatl as “She of the Jade Skirt”), the goddess of water and fertility, represented by Ximena Gonzalez; Tlazolteotl, the goddess of love, sex, and the patroness of adulterers, represented by Wendy from Colombia; and Coatlicue (translates as “Serpent Skirt”), the ancient Mother of the Gods, who gave birth to the moon, the stars and Huitzilopochtli, the Aztec god of war and the sun, represented by Nayeli, from Mexico.

Mictlán Collective’s performance was augmented by some ancient chants sung by Susano, together with the playing of an ocarina, an ancient wind instrument made from clay, and a range of drums. One of those percussive pieces, called a Teponaztli, is a beautiful pre-hispanic drum made from a fire-hardened wooden log, whose variable-length slits on the top surface create different tones when struck with a stick. Another, Mayan instrument, looking like a large trumpet, is called Hom pax. Its hollow structure is made from a quiote, the tall reproductive stalk that grows out of a maguey, a member of the agave plant family, whose blue sibling is famous in the making of tequila.

Contemporary culture rooted in the past

Susano contemplated how contemporary culture is rooted in the past: “We believe that we are currently experiencing an identity crisis in many ways”, he said, “perhaps caused by marginalization, abuse, ignorance, progress, education; and we think that this can also represent an opportunity to review, revalue and rediscover our origins and our cultural heritage and give them a new meaning and make a presence in the multi-cultural field to broaden the global vision of Mexican culture. And what better opportunity than being in a country interested in multi-culturalism and interculturality?”

Mictlán Collective is a voluntary organization that has been supported with presentation and awareness-raising spaces by other not-for-profit organizations such as Hispanic Arts Society, Casa Mexico in Alberta, CALMECA (the Calgary Mexico Society) and the local Latino media. The group aspires to receive more funding in the future and hope they can stay in Calgary performing and promoting Mexican culture and strengthening multicultural relationships in this community. Visit their Facebook Page at Mictlán Arts and Research.

The first Dia de Muertos Parade in Calgary, presented by the Hispanic Arts Society in collaboration with the Artists Collective from Mexico, Mictlán took place on Friday, November 1, 2019. Click here to see the story and more photos from that event.