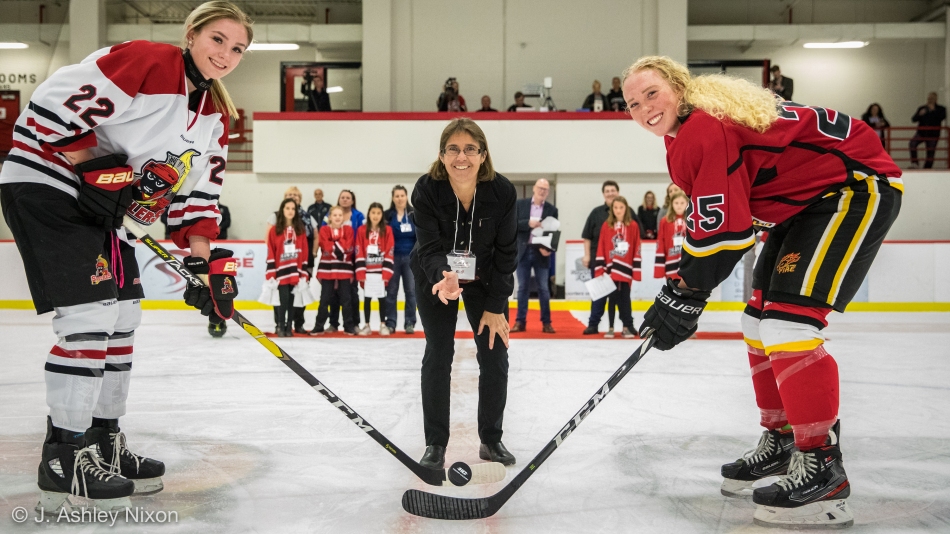 Calgary Fire has a new home. A new barn for the 2019-20 Alberta Female Hockey League season.  Father David Bauer Arena officially opened up its doors to the city’s Midget AAA team, families and fans on Saturday for their season opener against Lloydminster PWM Steelers. The team can now enjoy and benefit from playing on the famous Olympic size ice surface next to the University of Calgary campus. The players also have their own dressing room, complete with a customized red paint job on the door, and access to the training facilities that have served top athletes in the city for years.

“They established a lot of gold medals out of this building and we’re hoping that some of that championship spirit will rub off on our girls.”

“It’s a great opportunity for the girls to have a home venue and to be able to work out of a first-class facility as well as one that has such historical significance to women’s hockey in that it was the home to the national women’s team for so many years. They established a lot of gold medals out of this building and we’re hoping that some of that championship spirit will rub off on our girls.”

Suto scores to win the game

Calgary Fire AAA won with a single goal scored by Hannah Suto in the first period. “McKenna [Bolger] dumped it in and then I just took it off the wall and shot it and it went in”, she said after the game.

Suto was called up to the AAA team from Calgary Fire White AA earlier in the week as forward, Ella Kitchen was indisposed over the Thanksgiving weekend. “I wasn’t expecting it, definitely, but [I’m] really exciting being called up and getting the score.”

The result continued Fire’s winning ways for the start of the season-points from a shoot-out victory against Rocky Mountain Raiders and a regular time win over Red Deer Sutter Fund Chiefs.

Tenacious on the backcheck

“I think that our girls had a really good game away from the puck as much as with the puck.” said Coach Fenton after the game, adding:  “Our girls were tenacious on the backcheck and turned pucks over which allowed them to transition well and keep Lloyd from establishing anything in our own offensive zone.”

More photos for the game

Please visit J. Ashley Nixon Communications for more photos from the Calgary Fire versus Lloydminster Steelers and other hockey games. A select set of photos is available. Additionally, you can view a full gallery of images from the opening night, including player portraits and the opening ceremony at Father David Bauer.

4 comments on “Fire opens up in new home”