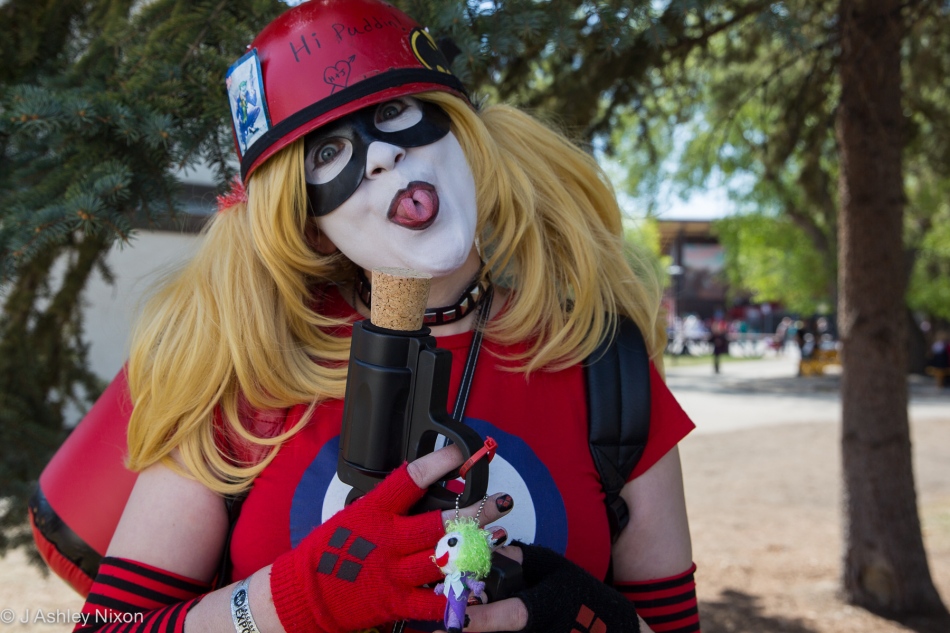 Stef was doing a mash-up cosplay at the Calgary Comic & Entertainment Expo (Calgary Expo) at the Stampede Showground this year. She saw a photo on a website showing a mix of Tank Girl and Harley Quinn and figured out that it would be a cool idea to work on.

Tank Girl, the film based on the British comic of the same name, was directed by Rachel Talalay in 1995. The B-movie didn’t make much at theatres but has become something of a cult with its punk female lead (played by Lori Petty) and a post-apocalyptic world without water, or rules, set in 2033. The anti-heroine clubs together with some mutant soldiers called Rippers to take on the oppressive corporation Water and Power headed up by Kesslee (played, with menace, by Malcolm McDowell).

The soundtrack, put together by Courtney Love, is a good one. It includes a re-recording of Girl U Want by Devo (appears in the opening credits). Also, there are tracks by Bjork (Army of Me) and Theme from Shaft by Isaac Hayes (plays in the scene where Tank Girl first encounters her tank).

The other side of Stef’s mash-up is Harley Quinn. Her helmet has “Hi Puddin” written across the front and a playing card tucked into the strap. Touching reminders of Harley Quinn’s romantic connections with The Joker in the Batman comics.

View or purchase All Dressed Up: Portraits of Cosplayers

Some of these photographs are featured in my new book All Dressed Up: Portraits of Cosplayers. You can view (virtual flip page) and/or purchase a print copy or Instant PDF version (viewable on any device) via this link.

Copies are also available for purchase at The Camera Store, Calgary.