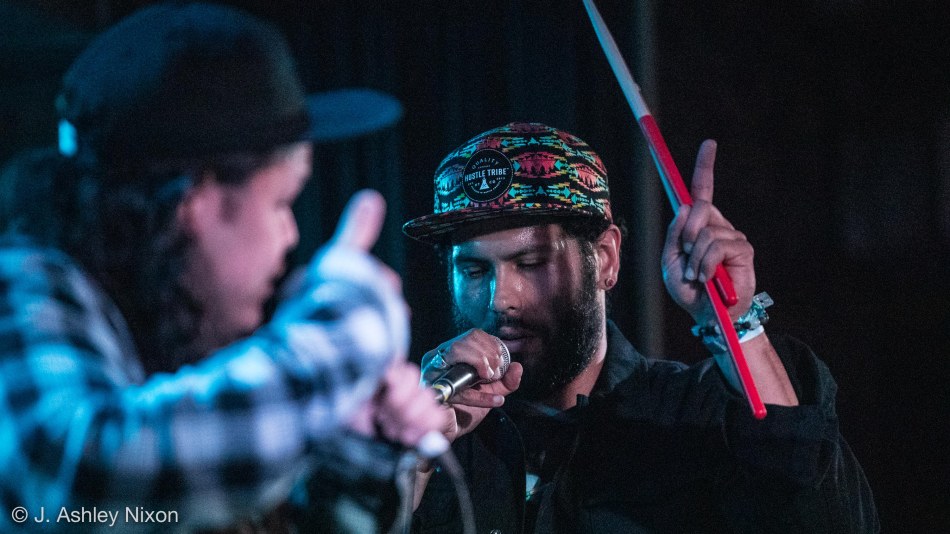 Mob Bounce with Craig Frank Edes (aka The Northwest Kid) on the left and Travis Hebert (aka Heebz the Earthchild) at the Commonwealth Bar & Stage, June 21, 2018. © J. Ashley Nixon

With no Sled Island festival this year, I am looking back at previous events over the last four years. During that time, I photographed 66 bands, solo musicians and stand-up comedians at ten venues across the city. My book Sledding: Sled Island Music & Arts Festival 2016-19 was published on June 23, 2020. Here is an excerpt from the gig I covered at Commonwealth Club on Thursday, June 21, 2018, to celebrate National Indigenous Peoples Day in Canada:

National Indigenous Peoples Day in Canada was celebrated on the Summer Solstice with a variety of events in Calgary hosted by Sled Island Music & Arts Festival and Arts Commons. The Commonwealth Bar & Stage was the venue for a gig by Lido Pimiento and Guests, presented by CBC Calgary, Indigenous Resilience in Music (IRIM) and Drum Beat.

nêhiyawak, a drums, keys/bass and guitar/vocals trio from amiskwaciy (aka Edmonton) started up the show playing indie rock. As the audience thickened, the music progressed to Electronic/Hip-Hop from Mob Bounce and Snotty Nose Rez Kids (SNRK), both comprising singing duos with backing tracks.

Travis Hebert (aka Heebz the Earthchild) and Craig Frank Edes (aka The Northwest Kid), based in Vancouver, have been in action, writing, recording and performing their well-phrased Alter-Native Hip-Hop with Mob Bounce since 2004.

Darren “Young D” Metz and Quinton “Yung Trybez” Nyce performing as SNRK draw their musical experiences and name from their upbringing on the Haisla Nation Reserve in Kitimaat Village on the west coast of BC. Their lyrics venture passionately into the politics of indigenous life including ongoing tensions around pipelines through their traditional territory. Their performance included Savages (supported by a third rapper), a song featured on their current album, The Average Savage. This was included in the Polaris Prize long list, one of Canada’s most prestigious music prizes. SNRK also pulled up on stage local Hip-Hop
artists Priya and Bhagya Ramesh, who perform as Cartel Madras.

Lido Pimienta, a Colombian Canadian artist who won the Polaris Music Prize in 2017 closed out the evening with a vigorous act of Spanish-
language music and theatre interspersed with vivid conversations with the audience about her experiences and perspectives on life. This included songs from her award-winning second album, La Papessa such as En Un Minuto, Fornicarte Es Un Arte and Quiero Jardines.

You can view (virtual flip page) and/or purchase a print copy or Instant PDF version (viewable on any device) of Sledding: Sled Island Music & Arts Festival 2016-19 via this link.

0 comments on “Sledding at Commonwealth Club”