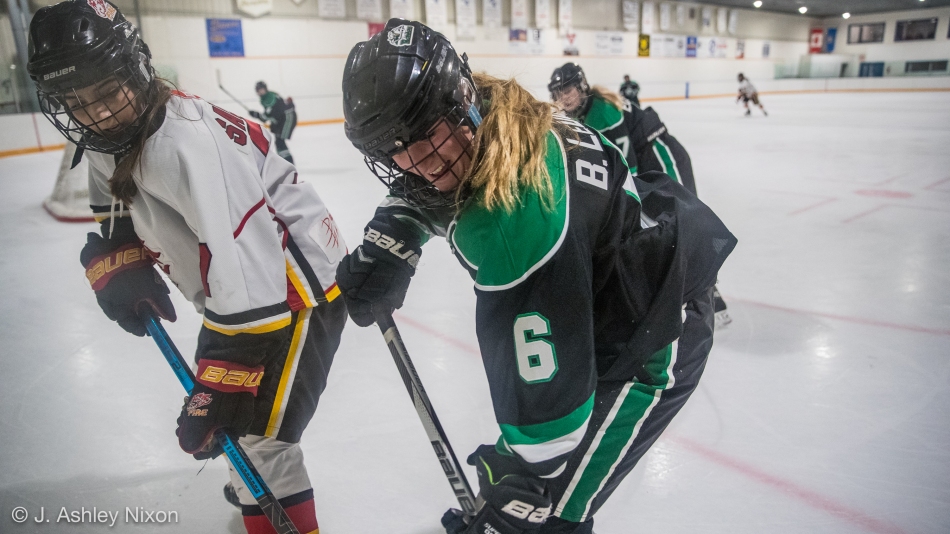 A nice Sunday drive south from the city to the Prairie country of Blackie gave dividends for Calgary Fire White with a win over the Rocky Mountain Raiders. It was a refreshingly warm (16 degrees Celsius) day for November; a day selected to showcase local hockey across Canada in the Hockey 24 film project, presented by Scotiabank, that will be released in Spring 2020.

Set on the  Prairies, 70 km southeast of Calgary, the farming community of Blackie, Alberta may be small in size (a population of 314 according to the 2016 census) but proportionately big on the hockey map of Canada. The hamlet was the homeplace of two NHL players. “Boxcar” Pat Egan (1918-2008) played with the Boston Bruins and New York Americans. Jeremy Colliton, (born 1985) played with New York Islanders and has been the head coach of the Chicago Blackhawks since 2018.

It was a closely matched game, with just a single goal separating the teams. The goal was a thing of beauty, scored by Meghan Dean, two minutes into the final period. Dean skated away from her defensive markers, and took a shot from the left faceoff circle. The puck whizzed over Raiders goalie Ellen Poelzer’s left shoulder, hitting the middle support post inside the net with a clang that is a joy to the ears of a shooter.

Hockey 24 is a documentary about community hockey in Canada, all filmed on a single day,  Sunday, November 17th. Presented by Scotiabank, this collaborative venture, involving the work of filmmakers from across the country will be released in Spring 2020. A short film from the Calgary Fire versus Rocky Mountain Raiders game can be viewed here. Meghan Dean’s game-winning goal is shown here:

Up next: Fire White have a weekend of games in the WickFest tournament during November 22-24, including an international against La Seleccion Nacional de Mexico. Alberta Female Hockey League games recommence for Fire White on Friday, November 29 with a visit to Airdrie Lightning.

Please visit J. Ashley Nixon Communications for more photos from the Fire White versus Rocky Raiders and other hockey games.