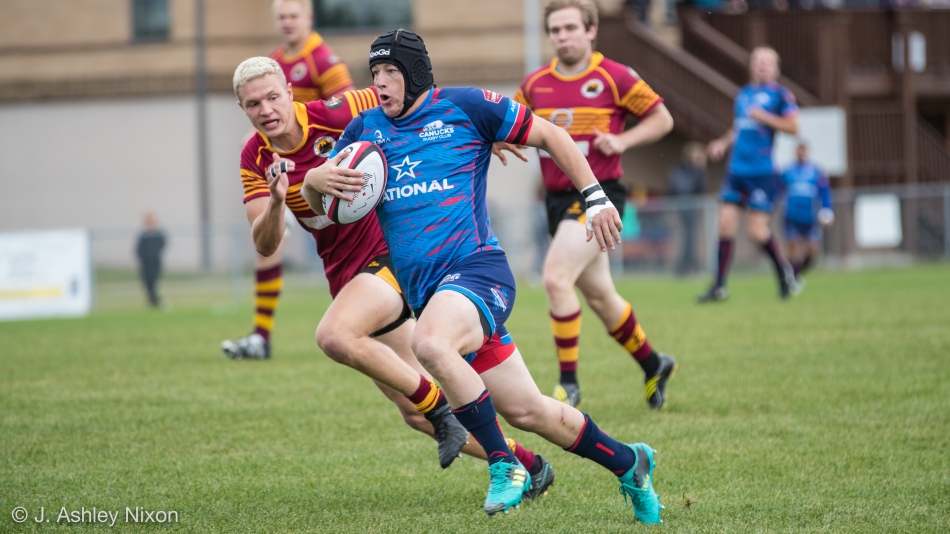 Josh Bentley scores the first of his two tries in the Calgary Canucks game against Nor’ Westers at Calgary Rugby Park on August 10, 2019. © J. Ashley Nixon

The Calgary Canucks navigated a nine-try win over the Nor’ Westers in Round 7 of the Alberta Cup on Saturday at Calgary Rugby Union. The first one came two minutes after the kick-off when flanker, Josh Bentley broke through to score just left of the posts. The Dragon, Derek Arnold roared through the middle again at the eight-minute mark, followed by scrum-half Chad Spence after 18 minutes. Bentley (and there was only one on the field for this game as his brother, Jake sweated it out in the accountancy exam room) got his second try of the game after 25 minutes. A loose pass by the Canucks in the middle of the pitch at 29 minutes gave the Nor’Westers the charge to pelt in and get on the scoreboard with their first try of the game.

Just before the interval, the Nor’ Westers were penalized for collapsing the scrum. Steven Arnold put in a nicely-placed kick just ten metres out from the Edmonton team’s line. Tom Dillon reached up high, made a clean catch and deftly delivered the ball to Number 8 Matt Megaw who rushed around blind side of the lineout to surprise the defence. With Connor Tweed’s complete accuracy in the five conversions, it was 35-5 at half-time.

Winger Oliver White sped in to score after three minutes in the second-half. Tweed’s conversion kick was a thing of beauty: from close to the left touchline, the ball lobbed in and hit the top of the crossbar to go over and make it 42-5. Eight minutes in, the Nor’ Westers were penalized; the Canucks kick didn’t get over the touchline but, with some aggressive follow-up tackling by Nathan Pratt, the ball and its collector did. From the line out, the Canucks spun the ball out left. Logan Jones made a push for the line and set up the second-phase ball for his front-row pal, Gabe Kajdy to go over. From a relatively easy position, the conversion did not go over. But that was from the boot of Richard Migneault, not Tweed who was substituted after 28 minutes to leave him with a magnificent unblemished record of six kicked conversions against the fur traders.

In the 29th minute, Megaw went for a run down the left-wing and, running out of territory, flipped the ball back for his supporters. Fan-favourite, Trea Hande was there to dive on the loose ball, score and get the best cheering of the match from the big and noisy Canucks Dad’s Army enjoying their rugby and jugs of Banded Peak brew in the stands.

The Nor’ Westers got a second try after half an hour of play. Pratt made his Mowgli power move for the line at 39 minutes but the referee determined the ball was held up, no score. But his work was rewarded as the Canucks got a great push in the ensuing scrum, scrum-half Spence picked up and went over uncontested. With his own conversion and the last kick of the game, it was a win for the boys in blue, 61-12.

Please visit J. Ashley Nixon Photography for more photographs from this and other rugby games.

0 comments on “Canucks navigate nine through Nor’ Westers”