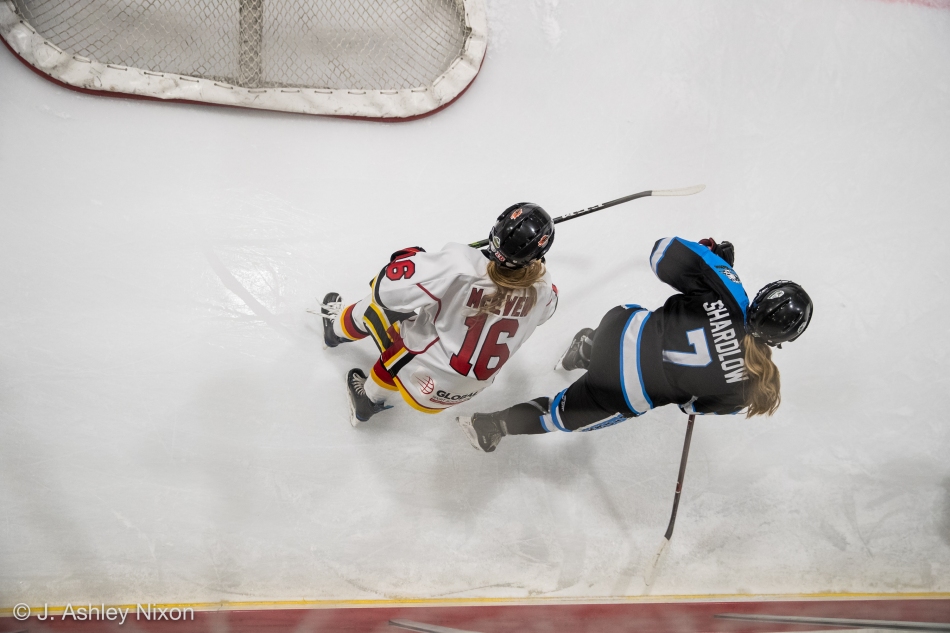 It was a calm first twenty in De Winton. Three shots in from the Rocky Mountain Raiders and just a few more from Calgary Fire Red playing beneath the running track at Scott Seaman Rink. A bit of a family weekend start in Alberta, maybe some drifting time on the beach? But the tide turned in the second and the Reds were surprised by a goal from Olivia Bailer. Calgary managed to wade back in with 40 seconds remaining, a goal scored by their own Olivia (Sutton), who secreted her way into the slot to get a nice shot in, glove-side.

Fire Red was surprised by the Raider’s Kate Pickering three minutes into the final period when a rare misunderstanding between goalie, Rebecca Boswell and defender Teah Workman left them both waiting for the other to pick up the puck. Neither did, and the Raiders were up 2-1. Fire Red shook their heads, re-gathered and worked themselves back into the game a minute or so later. The puck rebounded from the Raiders goalie, Ellen Poelzer and presented itself nicely to Kelly Stanford who popped it in, five-hole. It was a tied game going into overtime.

Four on four for five minutes: no score. The shoot-out got going with the Raider’s Madeline Hubbard. Boswell bested that one. Then Izzy (Isobel Pettem-Shand) stepped up to slink one past the sprawling glove hand of Poelzer. Brooklyn Palin was stopped by a well-timed right pad save from Boswell, then Poelzer stopped Rebecca Alloway. The Raiders sent in Alexis Smith for their third run at goal. This time it was Boswell’s left pad that barred the way and Fire Red had found their way to a win.

It could have been the Black Eyed Peas with their funky number, Let’s Get It Started. But I’m going with another monochrome link: the Black Crowes with their 1990 cover version of Otis Redding’s R&B classic from 1964, Hard To Handle. It comes with a great guitar solo, which didn’t get aired in the arena. But if you listen long enough to this video clip, you will get there, satisfaction guaranteed.  Hard to handle, light your candle!

Up next: Maybe even as you read this, Calgary Fire Red MAA are on a road trip south through the snows of southern Alberta to Lethbridge to play the Cyclones at Adams Arena (14:00).