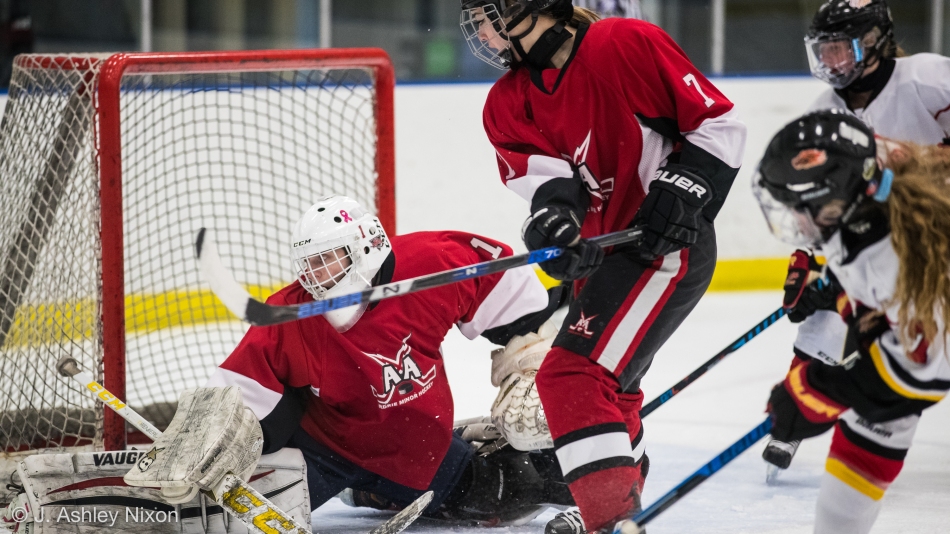 It was a yo-yo game at Genesis Place: an up and down, push-me, pull-me affair on a cold and wintery Friday night in Airdrie.

Calgary Fire Red took the lead from their first attack of the game- a goal scored by Siobhan Sullivan. Adria Lubert made it 2-0 for the visitors after ten minutes then Madison Black got one back for Airdrie before the interval. The home side equalized two minutes into the second period with a goal scored by Jenica Wilkie. The topsy-turvey continued two minutes later when Skye Mathew scored unassisted. Airdrie returned the scoring six minutes into the final period.  Just inside the final five-minute mark, Meghan Dean got the lead for Calgary but once again Airdrie tugged the string and Maeve Van ‘t Klooster found the kinetic energy to equalize.

Fire Red killed off a power play running over into extra time and, like the game played in December, this one went to a shoot-out. First up was Bex Alloway for Calgary, who put the puck away above Jocelynn Pearce’s glove. Madison Black responded positively for Airdrie, then Isobel Pettem-Shand got pushed out wide for Calgary. Fire Red’s goalie, Rebecca Boswell stopped the second Lightning shot and with a goal from Kelly Stanford, it was down to Maeve Van ‘t Klooster to keep Airdrie in contention. Boswell pushed her right pad out and denied her, giving Calgary the extra point and just one win away from the top spot in the southern division.

Wonder Wall by Oasis gets an honourable mention: a great song that doesn’t feature very often in the arena playlists. I’m going, however, to continue the theme of yo-yo’s and pick a song that could have been played. It might have been The Kinks; it might have been Basement Jaxx, both of whom released songs with that name. The winner though goes to Yo-Yo Ma, cellist extraordinaire for his performance of Bach’s Cello Suite Number 1 in G Major. It’s a classic, man!