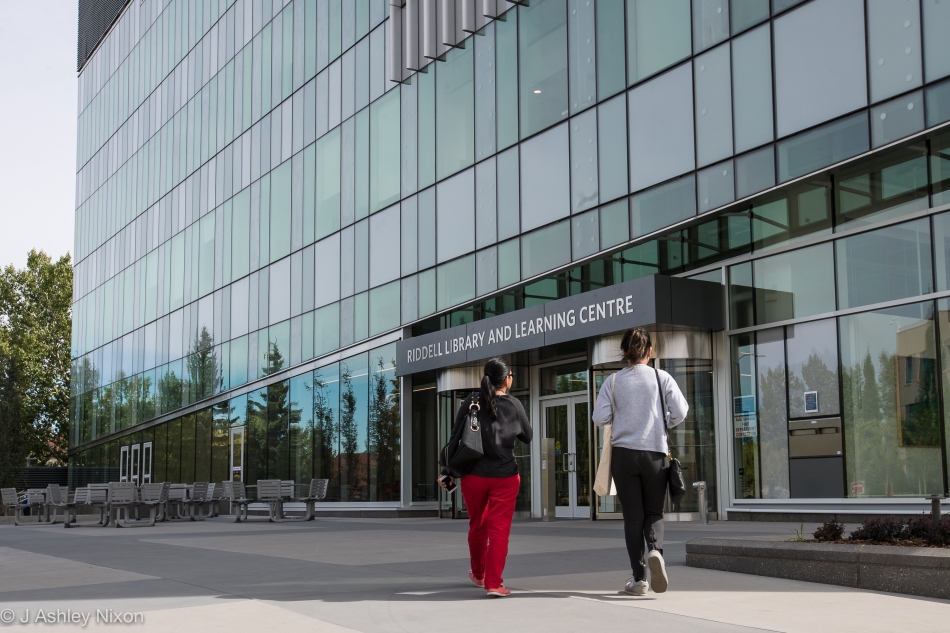 Libraries have operated as repositories of printed information and knowledge for centuries. One of the oldest and most famous in Europe, the Bodleian Library (Oxford), opened in 1602. The common practice then was to chain up their enormous tomes so they couldn’t be removed by their selective, thoroughly thoughtful users. Others, like the Library of Congress (Washington DC) and the British Library in London, vie for being the biggest in the world, depending on the indicators you choose, holding millions of physical items in stock. Some prestigious libraries are still kept out of common public use. The Library of Parliament in Ottawa, for example, is generally only open during a guided tour, although it is always in the public eye, on the Canadian ten-dollar note as a holographic feature.

Calgary’s new edition, the Riddell Library and Learning Centre (RLLC) which was officially opened on Sept 7, is sure to make a significant contribution to the Alberta chapter of these global networks of learning with its exciting bold look and sustainable design focused on users and their intellectual interactions.

You won’t find a chained book here but you can hook up to a treadmill desk and get a work out as you learn. Or you can pop into one of 31 group rooms that have been designed to enhance collaborative work. Later this semester you will be able to take a break in the library café. And there’s lots of room on the four floors and plenty of seats (1,800 of them), some by a real (gas) fire and others in nice and peaceful soft furnishings for those who want to study quietly, and comfortably, on their own.

Like the New Central Library (NCL) being built over the C-train tracks in East Village, Calgary, the RLLC was designed by a team that includes Calgary Architects, Dialog and constructed by Stuart Olson. The NCL, due for completion towards the end of 2018, will have similar dimensions to the MRU building (around 22,300 m2) and both are targeting for LEED Gold status (to recognize sustainable attributes of design such as energy and water use and the use of natural light).

The Hon. Marlin Schmidt, Minister of Advanced Education, Government of Alberta was one of the dignitaries to open the new facility and recognized the value to the broader Alberta community of this $88.4 million provincial investment, which was augmented by a significant donation from the Riddell Family Charitable Foundation. Minister Schmidt commented that the RLLC “will become an access point for information and knowledge for all of the people of Calgary so they can pursue any kind of kind of academic interest or project.” He added, “it will draw people together so that they can learn from each other and develop our communities.

Containers and conveyors of information and knowledge

MRU Librarian, Dr. Carol Shepstone was asked how much information and knowledge exists in the new library. “There’s certainly containers of information,” she said and listed the 250,000 print books on the shelves, the half a million e-books, and 70,000 electronic databases that the library subscribes to. “But I think there’s so much more,” she said. “There’s audio, there’s visual. And then there’s the information that we share with each other. The knowledge that students have, that they exchange with each other and build on those ideas. And the knowledge that faculty brings.”

Designing a building for a learning community

The rapid transfer of information between users, made possible through digital technology, has become more important than books on shelves in libraries now. Creating this capacity for sharing – both the technology and the right ambiance-is a vital part of the design process in building a new library. So, what has MRU done? “I think that really ties into the kinds of spaces that we have,” said Dr. Sheptsone. “It’s those places where students can sit and exchange ideas and engage intellectually, whether it’s in the café, sitting by the fireplace, in group rooms, even silent contemplation on your own” she added.

I wanted to get the views from the designers as well so I asked John Souleles, the architect in charge of the team at Dialog, which of the thousands of design elements, were the three most important ones in making this a learning community? He believes that the whole notion of collaboration starting with the relationship between architect and client leading into designs that work for students to work together is one of those important themes. “One of the most important salient features is the connective tissue between all of the spaces in this facility where you can see the exchange of information happening and the realization that as much learning and as much intellect happens outside of a structured classroom as it does inside of a classroom,” he said.

Souleles described how it was important that the project should create a community facility. “It (must have) its arms outstretched to the community, its spaces are not exclusive to the university it’s not elitist, it’s a democratic type of space so that anybody of any knowledge, intellect, faith, religion or point of view is welcome in the library.”

His third important feature is the sustainable ethic of the project itself, especially what he calls “the right to light”. “We’re tracking LEED Gold but in addition to just the metrics of a sustainable building, and the energy efficiency is the notion of a right to light, the natural light, the ventilation, the communicative nature of the spaces and understanding exactly how and where you are at any given moment in time so the views and the connections to the community become really important.”

Mount Royal University, in partnership with the architects and builders at Dialog and Stuart Olson, has come up with a new definition for the library as a connective and democratic space for learning. For MRU students and faculty, as well as the community of Calgary and beyond, learning just got more of an exciting, fun and pleasant thing to do.