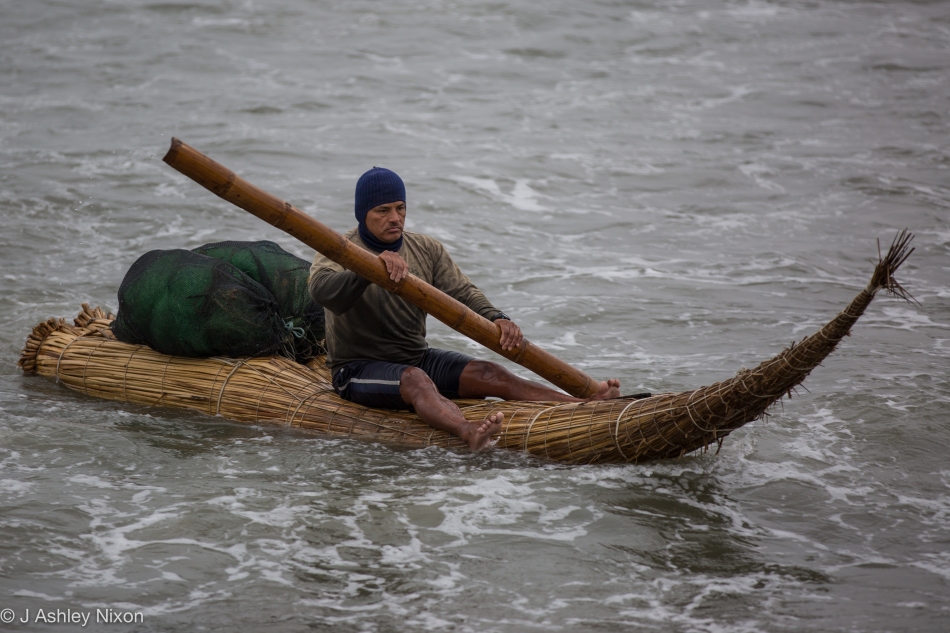 Little horses (caballitos) line up along a stretch of beach in front of Huanchaco, Peru. It’s around seven o’clock on an August morning, the winter, off-season for holiday visitors to this popular coastal town about 13 km west of the city of Trujillo. The cafes and restaurants are closed. No sign of movement in the surfing shop and there’s a cool, humid breeze coming off the choppy Pacific Ocean. Cold enough for a small gathering of local people to keep their hands in their pockets and zip up their jackets.

Oswaldo steps through, wearing a curious, cross-seasonal combination of shorts and a long-sleeved t-shirt plus a balaclava. He ambles down the steps in his bare feet to the pebbly beach and unhitches his horse. There is no complaint as he lifts it up and over his shoulder. Other’s join him to carry their own caballito to the water’s edge.  There’s a brief discussion, some loading up of nets and then out into the waves. Just like these Peruvian fishermen have done things for a couple of thousands of years or more.  They paddle their reed boats out beyond the surf and then spread their nets between boats and wait for an hour or two.

When the fishermen return, a pod of pelicans is waiting for them in the shallows. A squadron of scavengers, who instinctively know there is easy-over breakfast to be had, should any of the fish drop out of the nets, thanks to the sea-lions (Lobos del mar) that frequently bite through them.  This time, Oswaldo caught around 5 kg of fish, an assortment of Peruvian white fish, Chita (Anisotremus scapularis) and Peruvian branded croaker, Suco (Paralonchurus peruanos). On his best day, he might get ten times that amount. He gathers his catch into plastic bags and heads up to the street where early morning customers are waiting to buy the freshest of fish for between 10-25 soles per kilo.

Further up in town, I met up with José, who has been fishing this way for more than 50 years. He told me how the reeds are cultivated, like a farm crop, in wetland pockets in the sand dunes at the north of the beach. And then he offered to show me how a Caballito de Totora is made, right there in the street. He bundled and bound reeds together, creating a beautiful cultural sculpture with proven, marine transportation credentials.

The totora reeds, Schoenoplectus californicus subs. tatora (California bulrush), provide natural buoyancy from the spongy mass of vascular tissue (pith) contained within their culms (stems). Over time there have been some modifications to the construction process. Twine is now used instead of grasses to bind the reeds. And one or two blocks of expanded polystyrene might make their way into the structure to add additional buoyancy that doesn’t suffer from water-logging (a boat typically lasts for about a month after which it absorbs too much water and starts to sink).

I made my way just north of Huanchaco to see where the totora reeds grow in the Humedales de Huanchaco. I stopped briefly to buy some cubes of fresh-cut sugar cane from Antonia’s street stall and talked to a teacher with a group of school children bussed in from Piura to fly their kites. The wind was strong and blowing up sand across the open beach. The totora reed cultivation process deals with that wind perfectly. The reed beds grow in an array of small wetland hollows, excavated for this purpose in the sand and protected from the sea winds by short fences. The plants are cut green and then laid out to dry for about two weeks before being collected to make new boats. It’s a sustainable agricultural practice that has linked with fishing at least since the Moche culture that existed along the northern coast of Peru between 100 BC- 850 AD.

Excerpt from Huanchaco, my forthcoming edition of PeruZine available through Betula Books (click on the button below to view)

2 comments on “Fishermen, reeds and boats of Huanchaco, Peru”