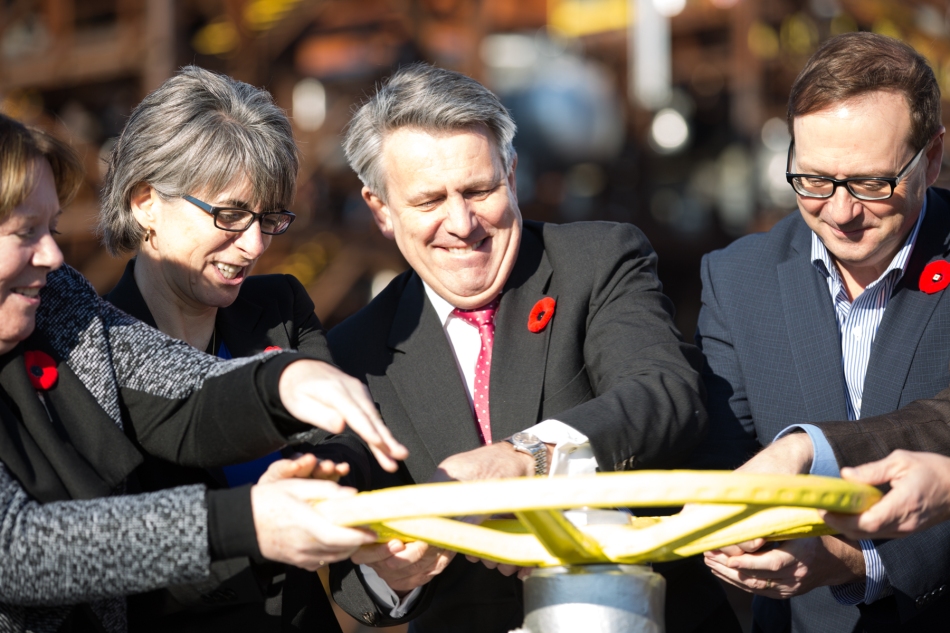 One million tonnes of carbon dioxide (CO2) seems like a big number. A lot of gas. Trouble is, we can’t see it. Turn that number into the emissions from about 250,000 cars in a single year and it starts to make more sense. It’s a lot of travelling around or maybe idling around in city congestion. Both of those numbers can now be applied to the Quest carbon capture and storage (CCS) project recently launched by Shell at the Scotford Upgrader. Quest was built to take out one-third of the CO2 produced at the site north of Edmonton, Alberta, Canada where bitumen supplied by the Canadian oil sands is turned into synthetic crude and then into gasoline, diesel and jet fuel. It is the first application of CCS to mitigate CO2 emissions from the oil sands industry.

After about 30 months of preparation and construction, the efforts of around 2,000 people have put Quest into commercial operation. It has already captured (using amine technology) about 200,000 tonnes of CO2 from three Hydrogen Manufacturing Units. The gas is dehydrated (there’s no desire to have corrosive carbonic acid in the system) and compressed, then sent north along a 65 km pipeline to three injection well sites. Here the dense, fluid state CO2 goes deep (2 km) underground where it will be safely and permanently stored in a saline aquifer bounded by multiple impermeable rock layers. A network of sensory devices along the pipeline route and around the injection wells has been installed to externally verify (by Det Norske Veritas (DNV)) that the CO2 is contained underground and conforms with government expectations and standards.

At the Quest launch, I took both real and virtual tours of the CCS technology. No doubt the latter was amusing to onlookers as I spun around and looked up and down through an oversize set of virtual reality (VR) goggles. I shared this CO2 journey with what reminded me of characters from the film Despicable Me-a host of molecular minions, giggly moving from the atmosphere then down through the earth along an injection well.

Climate action in the production and use of fossil fuels

In a strange coincidence, the Quest project launched on the same day that President Obama rejected the Keystone XL Pipeline, citing climate change and it not serving the national interest. Had that project been approved it would have delivered more bitumen from the Canadian oil sands into fuel production in the USA and beyond. It was a strong reminder that climate action such as with CCS by the fossil fuels industry is going to be needed more and more to gain new market access. In the case of hydrocarbon transportation fuels, sourcing and manufacturing account for roughly 20% of the total emissions of CO2 in the “wells to wheels” life cycle. The bigger part (80%) though comes from the travel and logistical choices the majority of us in the world still make based on using these fuels in internal combustion engines.

A blueprint but not a silver bullet

If CCS can be applied to the legacy coal-fired power stations we still use for much of the world’s power it can “become a key technology in (our) actions on climate change” said Shell’s Chief Executive Officer Ben van Beurden at the Quest opening ceremony. “But it’s not a silver bullet” he also said.

Clearly, CCS has to stand alongside much more aggressive, wholesale development of biofuels, hydrogen and electric vehicles for transportation and solar and wind for power generation in our decarbonization portfolio.
Van Beurden also commented on how “Quest is a blueprint for future CCS projects globally”. The project now stands alongside 15 other large-scale CCS projects around the world that in combination capture around 28 million tonnes of CO2 per year.
But that needs to go up, way up, to more like 4,000 million tonnes by 2040 according to the International Energy Agency (IEA) if CCS is to be a significant technological player tackling climate change.

The agreement struck within the funding arrangements for Quest ($865 million in contributions from the governments of Canada and Alberta) to publicly share information on Quest’s design and processes will be key to helping bring down costs and make it possible for the future large-scale adoption of CCS around the world.

3 comments on “What does CCS look like and why is it important in climate action?”