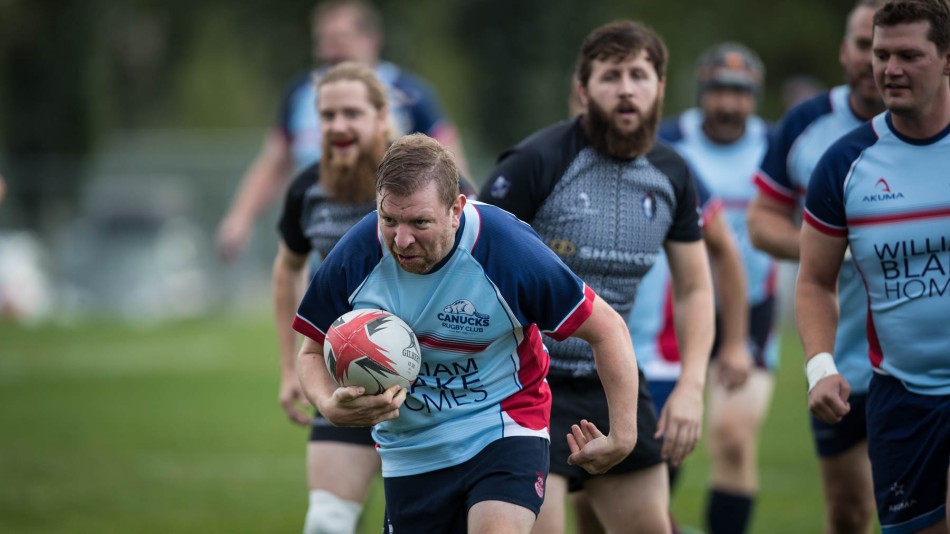 Friday night’s rugby game was memorable. Not because of a spectacular try, although good ones were scored. Nor was it due to a headline-grabbing dispute in the front row; it was a well-contested affair between the Canucks and Knights that ended up in a draw, 15-15. It was notable for the signal sent out to the community: anyone who wants to play the excellent game of rugby can do so.

Wearing the number 1 jersey, Matt Corkum could hardly control the smile on his face as he ran through the gate and led his team onto the pitch at Calgary Rugby Union. It was his first appearance for the club he has followed, as a committed fan, since 2015.

Corkum lined up for the kick-off and within seconds had the ball in his hands. Not the best of passes, and he was tackled in possession. Moments later, he received the ball again on his own 20 m line, this time with more room to run. Off he went down the left wing in tumbling, side-stepping style, brushing defenders aside before diving over the line to score his inaugural try. Handshakes and embraces ensued, with players from both sides getting into the celebration.

“I was over the moon in happiness!” Corkum said after the game. He had hoped to get the ball in his hands but never dreamed of scoring a try. “I could hear what sounded like the entire field and fans on the deck yelling, “Run Matty.” I was expecting someone to pull me down from behind, but I made it in.”

Over the past few years, he has often thought of taking to the rugby field alongside his friends. “I was nervous I was going to do something wrong to hurt the team like an offside or something dumb.”

Corkum was in good physical shape for his ten-minute shift, helped by regular visits to the gym and his passion for cycling long distances. Earlier this summer, he completed a 60-day challenge to cycle 2,000 km and raised over $3,500 for the charity Rocky Mountain Adaptive. This is just one of the significant accomplishments for this fellow from Nova Scotia, who has a Ph.D. in atmospheric science and is the head meteorologist at Dynasty Power, despite being born with spastic cerebral palsy.

But catching a ball on the run is no small challenge for Matt, and he appreciated his opportunity to show to others with disabilities that they can do it, whatever it might be. “The Canucks have always been inclusive towards me and never look down on me… They helped me show the ability within my disability and proved that people with cerebral palsy can play rugby.”

Players and officials in the Calgary Rugby Union and Canucks club talked with pride about getting Corkum out to play and their take on inclusiveness in sports. “To embrace a supporter to fulfill his ambition to be a player makes me proud to say I am a Canuck and Matt Corkum is my teammate,” said Club President Martyn Bentley. “The Calgary Canucks Rugby Club is a citizen of Calgary and participates in the community. Inclusion is part of being a participant. We want to show that we are a valuable citizen of the community”, he added.

Rugby is for everyone

“Matt’s participation in this game is a reflection of our sport’s unique culture and core values of passion, respect and integrity,” said Luke Demeter, VP Admin with the Calgary Rugby Union. “Rugby is for everyone. Inclusive acts like this are steps in the continuous journey of promoting diversity and growth in our communities.”

“Matt is a huge supporter of the club, and an exceptional human being putting the rest of us supposed able-bodied people to shame in terms of both his physical and intellectual endeavours,” said Canucks Third Team captain, Dave Danchuk.

Danchuk commented on the growing emphasis in the Canucks club on giving back and making positive contributions inside and outside of rugby, such as hosting events for families facing medical challenges, helping homeowners impacted by the 2013 flood, and regularly raising money for KidSport. “The club has always been a welcoming place, reflecting rugby’s reputation of having a role for everyone, regardless of body size or shape,” said the King Dad of the Dads Army, the name the club reverently gives to this recreational yet competitive team. “Marty (Bentley) asked if we could get him (Corkum) game time with Dad’s Army; in my mind, there was no question: of course, he would play.”

Seeing the Ability in disAbility

“When I think of inclusion, I think of a society where we work to include all regardless of ability,” said Corkum. “I try to convey a message of inclusion through doing.”

Matt is an advisory committee member of the Calgary Adapted Hub, an organization that helps children with disabilities to become included and have access to sports and other activities. He has also become well-known for his engagement events with medical professionals, educators and business owners. He speaks passionately, with authority and a lifetime of experience about taking the fear out of disabilities. “I hope that by me playing helps people to see the Ability in disAbility a little clearer.”

The positive experience of being part of a team

Dave Danchuk acknowledged the Knights and the referee, Andrew Petty, for agreeing to Corkum playing. “Being concerned about Matt’s safety, they ensured intensity was lowered when in his vicinity and, more importantly, adjusting the play which enabled him to score a try, which he didn’t expect to do!”

“While playing and scoring a try was the highlight, it is the positive experience of being part of a team that made Friday’s game truly exceptional. This was the first time I felt part of a team,” said Corkum. “Everything from the coin flip, locker room chitchat, the cheers, half-time pep talk and the after-game celebrations. I am a Canuck!”

Leave no one behind

The 2030 Agenda for Sustainable Development has its roots in the principles of inclusiveness, diversity, dignity, respect, fairness and opportunity for everyone. Those considered left behind in Canada often include women, Indigenous Peoples, newcomers, people with disabilities, seniors, members of the LGBTQ2 community and youth. Leaving no one behind means that everyone—no matter their race, ethnicity, gender, sexual orientation or abilities—should be included in the economy and in society. All people should be able to participate in, contribute to and benefit from sustainable development.

Please check out the following links if you would like to do or learn more about inclusiveness in sports and seeing the ability in disability:

0 comments on “Sport for all to play”