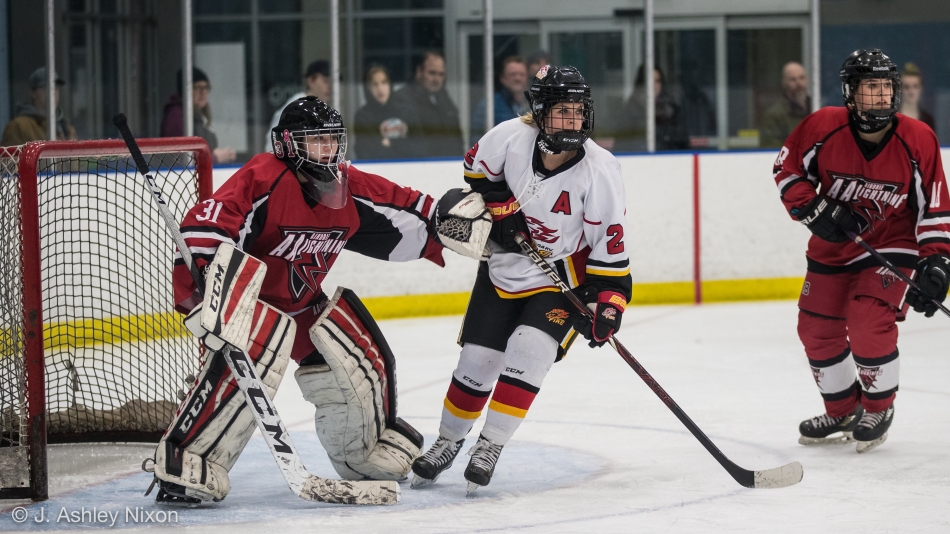 Meghan Dean’s goal in the third period gave Fire White their first goal and first win of 2020 in the Alberta Female Hockey League (Midget Elite). An empty netter by  Avery Krawchuk in the closing minute sealed the Friday night game at Genesis Place, Airdrie for the visitors.

It was a game played hard around the boards, with five body checking penalties and eight other grievances ending with trips to the box. Another body check, a collision between the referee and Avery Krawchuk, went unpunished.

Calgary Fire White’s win puts the team back to within a point of Southern Division leaders, Fire Red.

A shout out to DJ Rod and the Airdrie Audio crew for their excellent musical coverage of the game. So many good tunes to choose from so I am picking two. The second star goes a version of a merengue song that I first danced to in a night club in Caracas, Venezuela: Mueve Mueve by Sandy y Papo. This is the Latino version.

The first star goes to a cover of an iconic song by Thunderclap Newman that made it to No. 1 in 1969. Starting with the lyrics Call out the instigators because there’s something in the air this is most surely, fifty years later, an anthem for air quality and climate action campaigners. Make your vote: is it the Thunderclap Newman original or the cover of Something in the Air by Tom Petty?

Up next: Fire White is on the big ice at Winsport Arena, Calgary to face off against Southern Express on Sunday, January 12, 2020.