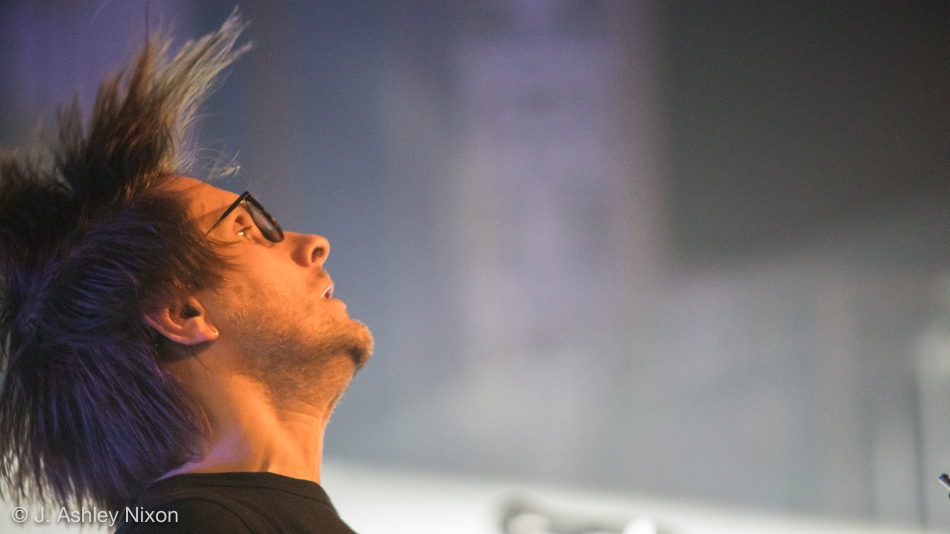 Steven Wilson has written a lot of songs. Quite a few, actually. You can hear them played under the names of No-Man and Porcupine Tree, that started in the 1980s. They are found in more recent collaborations such as Blackfield and Storm Corrosion. All in addition to the five studio album’s worth of songs in his solo career to date. It’s a pretty reasonable thing then, and something his old fans appreciate, for him to go into his back catalogue spanning over thirty years to play Porcupine Tree songs like Arriving Somewhere But Not Here, Lazarus, and Heartattack in a Layby. “They are not covers, they are my songs”, Wilson expressed, with a tad of outrage, in response to a review of his recent show in Vancouver.

He was at the Palace Theatre, Calgary, performing in the 2018 To the Bone World Tour as the band known as Steven Wilson. This was his second gig in Cowtown after a three-year break (see my review of that first show from 2015 He doesn’t Do Happy here). Although he played a cover of a song by Prince in the encore (more on that later), let’s be clear: the rest of the songs were his.

Sadly, I was unable to catch the first set from the beginning. What I did hear was The Same Asylum as Before from To the Bone, a beautiful song that has a Tears for Fears feel to it (perfectly legitimate given that Wilson has collaborated in productions with that great band) and Ancestral from Hand. Cannot. Erase. That song doesn’t just have a good guitar solo, it features one of the most uplifting, serene string performances, played live on this tour with surgical precision by clinician guitarist, Alex Hutchings.

In Arriving Somewhere But Not Here, from Porcupine Tree’s Deadwing (2005), the band started off together, gently handling small cube-shaped shakers, then Hutchings let it rip with a raucous riff on his English-made Waghorn guitar that even had some LED lights to show off his handiwork. That had lots of the Proggies banging their heads in delight. As a mood creator and balancer extraordinaire, Wilson followed that heaviness with some disco. It served as a moment for Steven to explain some of his musical influences, which show up with wonderful diversity in his To the Bone album. Variety is one of the reasons this writer really loves Steven Wilson’s music; he’s prepared to take risks, to explore and keep pushing the progressive rock genre. There were plenty in the audience grooving along to the Abba-Esque Permanating so take that as a good sign of appreciation.

As I noted in my 2017 review of the To the Bone album, Song of I would make such a great soundtrack for a future James Bond film, hopefully before Daniel Craig is ready to “give it all up”. My personal favourite from that album, the explosive Detonation, came up, again, with perfect sonic juxtaposition after Wilson’s acoustic version of Lazarus (from Porcupine Tree’s Deadwing) in front of a backdrop of a lovely quotidian family film, perhaps from Wilson’s own childhood. Next up was some pitch-perfect three-part harmony by Wilson, Hutchins, and bass/Chapman Stick player, Nick Beggs in Heartattack in a Layby from Porcupine Tree’s 2002 album, Absentia. Adam Holzman’s ethereal chords on the Korg keyboard got Vermillioncore going before transcending into a racing bass and guitar dual, powered up at the back by Craig Blundell’s mighty drumming all the way through to a very hard stop. Holzman led the way again into the last song before the encore, Sleep Together from Porcupine Tree’s album from 2007, Fear of a Blank Planet. It was, lyrically, a fitting end to the “official set” marked by its power chord sequence and words “Switch off the future now, Let’s leave forever.”

Prince in the Palace

Prince was in The Palace for the encore as Steven Wilson played his version of Sign o’ the Times, the opening song from the same titled album from 1987. In its introduction, Wilson quizzed the audience about his influences in his teenage years, then revealed he had a poster of Prince on his bedroom wall. Just one piece of evidence that explains his mission as an eclectic musician, unafraid to mix genres and be a Prog Rocker who likes to have fun. Except that is when he is singing (self-confessed) miserable songs. He performed two of those at the closing, either side of the Prince cover. The first, The Sound of Muzak, another song from Porcupine Tree’s In Absentia was introduced with a story about performing it in a gig in Japan, where the band struggled to get the audience to sing along to the chorus. It was so quiet in the auditorium that “there were tumbleweeds blowing around”, Wilson explained. Mindful of his earlier observation about Calgary being a bit quiet, the Canadian folks responded pretty well to Wilson’s pointing finger directions, at least in singing the “going down” part of “One of the wonders of the world is going down, It’s going down I know.“

The Raven flies out

When you want to be clear that the evening’s entertainment is coming to a close, the iconic The Raven that Refused to Sing is the one that Steven Wilson must play (unless you really want to be melancholic, in your Drive Home). And they did. Beautifully; reverently, in front of the stage screen showing the magical animated bird and other characters from the short film directed by Jess Cope and Simon Cartwright.

Steven Wilson is on his way east now to do some gigs in Ontario and Quebec before a run-up to the end of the year in the USA. Come back west, Steven Wilson, you are always welcome. Come back to Calgary soon!