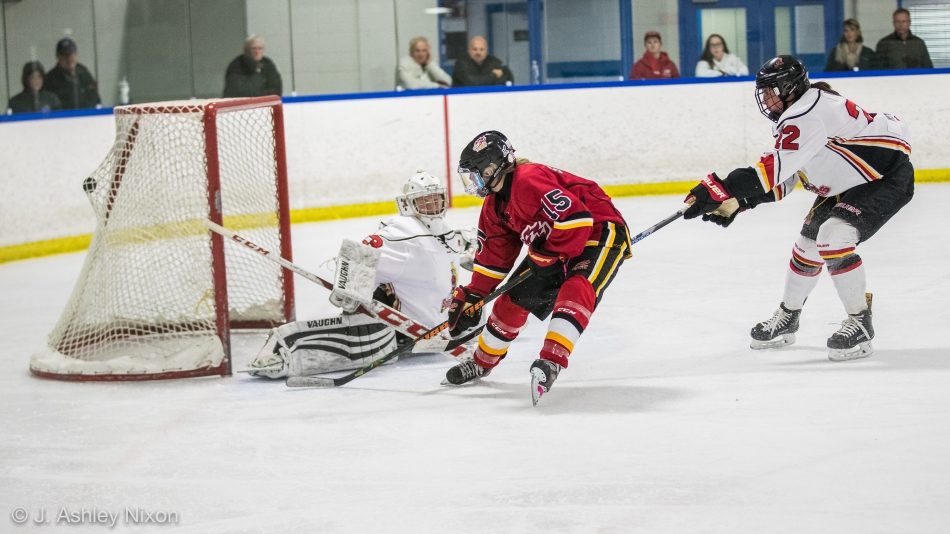 The disco ball was rotating; the dry ice smoking. DJ McE put the song that never ends on the turntable and everyone got up and danced. Viney’s discotheque was in the groove …

Almost like that, but not quite 1978. Denise and Teresa exploited the opportunity presented by a delay in getting the ice cleaned between periods two and three to get a fine and funky dance going to Earth, Wind & Fire’s September. In the time-keepers box. Inspiring stuff. Another team anthem in the making, perhaps? Who said it was all about the kids? Who said disco is dead?

Prior to this pirouetting pick-up, the Fire Red team was also grooving with goals in both the first and second periods. In the second (of nine) power play of the game, Meghan Dean capitalized on a loose puck to the left of the net and squeezed it past the glove hand of Stealers goalie, Kamden Rochford.

The Stealers almost stole a goal early into the second period with a breakaway move but that got shut down by some good back-checking by defence pair Katie Maloney and Jennifer Nixon. Fire Red got their chance with a breakaway with five minutes left on the clock. It was a slick, even-strength move down the middle of the ice by Kelly Stanford, avoiding a desperate hooking attempt by Lloydminster’s Kassidy Mannix and perfectly timing her shot, shoulder height over Rochford’s blocker. Fire Red was up 2-0. Tom Jones’ It’s Not Unusual was played to help celebrate the goal. Stanford got a punishing check into the back of the net as thanks for another attack, then before you knew, it was disco-time, which also included Maxine Nightingale’s Right Back Where We Started From (1975)

Two power plays and five minutes into the third period, Fire struck. Jennifer Nixon received the puck from a faceoff and passed right across to Katie Maloney who delivered on target.

Good grooves today by DJ McE while DJ Kitch was off spinning wheels in Palm Springs. You already know the result; here’s a link to September. You might also like September 99, a remix by English dance music duo Phats & Small that came out in, you’ve guessed it 1999. Go on, I dare you: sing Ba de ya, dancing in September falsetto like Philip Bailey.

Please visit J. Ashley Nixon Communications for more photos from the Calgary Fire Red Midget AA versus Lloydminster Elite Stealers game, and quite a few others.

0 comments on “Ba de ya: Fire Red dancing and skating into November”