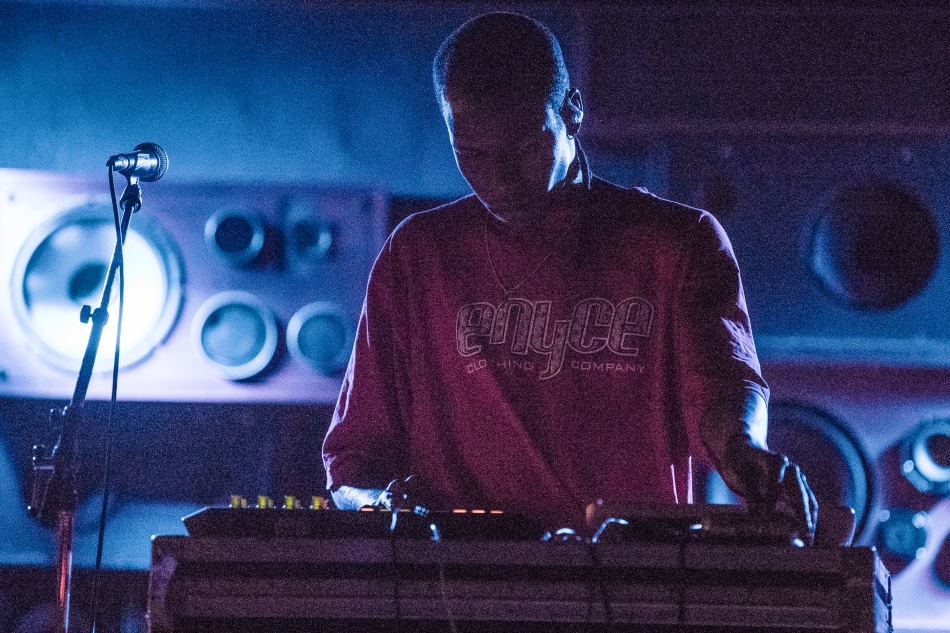 It was a throw-back to my days, well-passed, of working in a dark room, developing photographs the old way. Chemicals, spiralling rolls of film and the red safety light to work under. The austere lighting at the Commonwealth Bar & Stage cast eerie shadows on the stage, forming the perfect mood for listening, if not photographing, the music of LA timpa, currently on tour with Cold Specks.

LA timpa stepped up on stage clad and hooded in full winter parka on what had actually turned out to be a rather warm day thanks to a Chinook breezing into Calgary. The military-like fashion and the ambient music from his keyboard tuned my mind down into deep places: submarines; and exploration through a dark abyss. Then the considered melodies accompanied by, not so much singing as, intriguing voice sounds, took me into hard-edged, contaminated industrial landscapes; a tannery in Yorkshire I used to work in, or an abandoned car factory I once explored in Detroit.

I caught up with LA timpa (aka Christopher Soetan) after his gig, part of the Calgary Folk Music Festival Fall Concert Series, and he told me a little bit about his background and influences. His musical exploration is currently based on an EP released last year called Animals on the Toronto label, Slow Release. He’s a performer and a producer of moody experimental music that, while in a different music genre, reminded me of my first exposure to the psychedelia of Soft Machine from the 1970’s and Brian Eno’s work such as Ambient Music for Airports.

Four of the five tracks on his current EP contain the word animals. “Actually, it has nothing to do with animals, like actual physical animals at all,” he told me. “It’s a reflection of something conceived from events happening at that time which was me moving to Toronto and moving out of my parent’s place for the first time.”

Soetan was born in Lagos, Nigeria and his time there, particularly going to church, informed his approach to music. “Going to church every Sunday, and listening to beautiful melodies, and the choir, I think it transcends into the music that I make now.”

LA timpa is working on a new collection of music. “I don’t know if it’s going to be an LP or EP…it’s just going to be a project coming out.” We’ll have to see what that work is called, meanwhile, he continues his European and North American tour with Cold Specks, making the final set of gigs as they head across the Prairies back to Toronto.

You can hear Animals and see the LA timpa official video here:

More photos from the gig

Please go here for a review of the Cold Specks gig.

1 comment on “A dark lab of musical exploration: LA timpa at Sled Island”