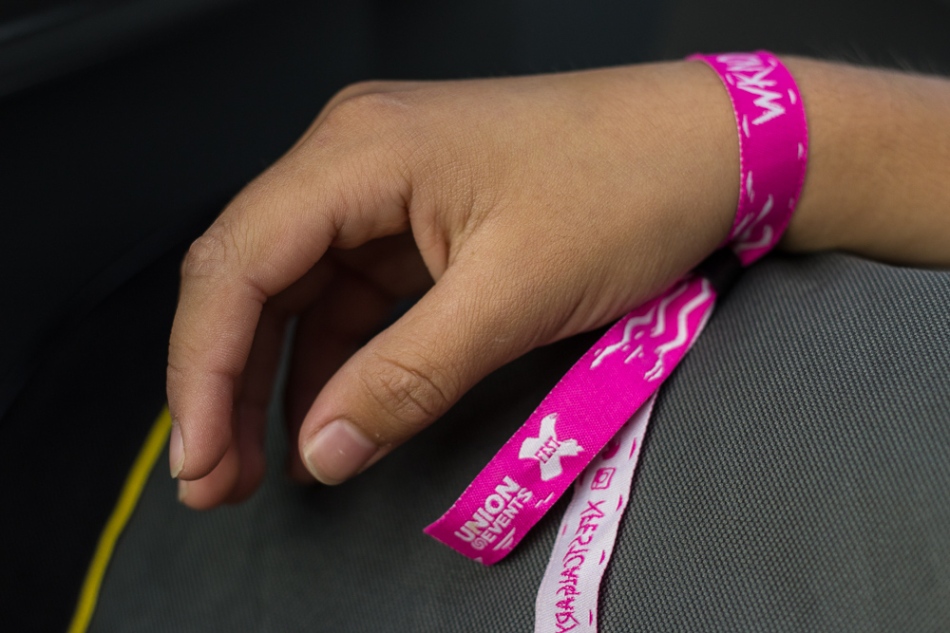 It was a sign of something to come. An Arctic Monkeys song, Do I wanna know? was playing from the X-Fest 2014 stage at the foot of the slope in Fort Calgary. But this was not the Yorkshire lads performing their Tyke Rock. It was going to be another six hours before the Sheffield quartet would come on and light up the crowd as well as the AM wave sign spread across the back of the stage. American band MS MR were humming along and decided, rather cheekily, to nab a cover of the opening song from the headline act’s current LP, AM. It was well appreciated as was their hit Hurricane to close their set. 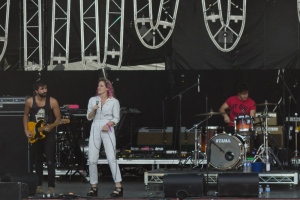 Cage the Elephant were up next and played from their self-titled first album songs such as Ain’t no rest for the wicked, their third single from 2008, this time with slide coming from a big white Gretsch in the hands of relatively new guitarist, Nick Bockrath. From the new album, Melophobia, highlights included Come a little closer. Sadly, no room today on stage for  roller-disco dancers for Take it or leave it (see video of the band playing retro, some palace, somewhere in Kansas). But, inspired by a building wave of crowd surfers, vocalist Matt Schulz got his shirt off and took a walk, then a plunge into the sea of spectators. 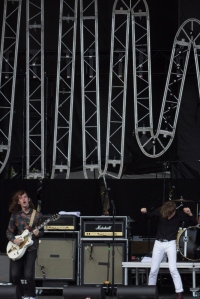 Foster the People opened things up with some enthusiastic, twin-team percussion between Mark Foster and Mark Pontius. A stream of hit songs then followed from Torches and their 2014 album, Supermodel. Plenty of good ones to choose from here including Helena beat, Coming of Age and of course, Pumped up kids. But they got to their funkiest with a cool rendering of Call it what you want from Torches. 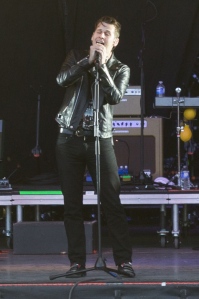 Things turned to an eclectic mix of folk rock, indie rock and more from Toronto’s Serena Ryder. Not only did she show the full three octave range of her mezzo soprano voice, she played her Flying V with venom on Stompa and performed an amazing combination of voice, guitar and kick drum while sat behind the kit. Nice style with the crowd too, taking them through a calisthenics class during Circle of the Sun and then signing the festival mascot, Finn, flown up from the Mosh Pit.

Calgary’s own girls, Tegan and Sara returned to town for the gig, fresh from another one up the road in Edmonton. Demonstrating her true allegiance though, Tegan came out at the end wearing a #11 Calgary Flames jersey. Sara suggested a friendly warning that could go on a truck’s licence plate: “Don’t drink and surf “. The crowd surfing crowd loved that, as they did the songs from Heartthrob such as Goodbye, goodbye and Back in your head from The Con. Finn from the American animated television series, Adventure Time was back up on stage for signing but in for some re-branding. Despite the combined front crowd’s vocal urge to “sign him”, Tegan mis-heard and thought they were shouting “Simon”. The name’s got to be a keeper for X Fest followers now. 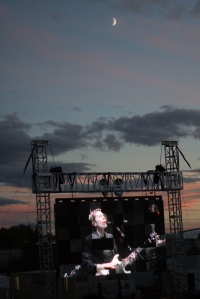 And then, at around 9:45 pm, it was time for the last, long-awaited act. Appearing through a fog of dry ice and the sounds of an old time dance tune, The Arctic Monkeys kicked off with their own real version of Do I wanna know? Songs spanning from their first 2006 album Whatever people say I am, I am not to their latest, AM followed with highlights including One for the road, Arabella, Snap out of it, I wanna be yours and I bet you look good on the dance floor.

Almost up to the curfew hour, the Sheffield lads encored with an enticing, start-stop-start version of R U Mine and that was it. The crowd was leaving with their spirits lifted yet further by a smart sound guy/girl’s selection of a Beatles song. But, like MsMr’s set earlier in the day, this was a cover version, even better than the original, sung by another famous Sheffield lad, Joe Cocker. Together, scores of voices sang along to With a little help from my friends as we squeezed our way through the exit gates and home along the banks of the Bow River.